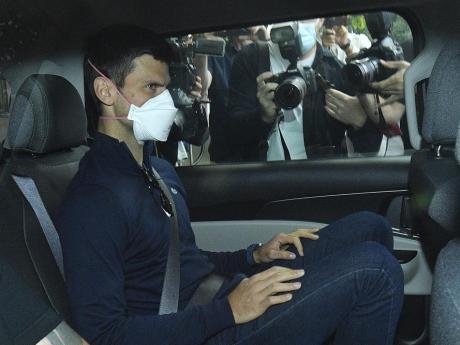 Serbian tennis player Novak Djokovic rides in a car as he leaves a government detention facility before attending a court hearing at his lawyers' office in Melbourne, Australia, Sunday, January 16, 2022. A federal court hearing has been scheduled for Sunday, a day before the men's No. 1-ranked tennis player and nine-time Australian Open champion was due to begin his title defense at the first Grand Slam tennis tournament of the year. (James Ross/AAP via AP)

MELBOURNE, Australia (AP) — Novak Djokovic left Australia on Sunday evening after losing his final bid to avoid deportation and play in the Australian Open despite being unvaccinated for COVID-19.

A court earlier unanimously dismissed the No. 1-ranked tennis player's challenge to cancel his visa.

Djokovic, a 34-year-old from Serbia, said he was “extremely disappointed” by the ruling but respected it.

A masked Djokovic was photographed in an Melbourne airport lounge with two government officials in black uniforms. He left on an Emirates flight to Dubai, the same United Arab Emirates city he flew to Australia from.

He has won a record nine Australian Open titles, including three in a row, but this time won't even get the chance to try.

“I respect the Court's ruling and I will cooperate with the relevant authorities in relation to my departure from the country,” he said in a statement.

Djokovic said he was “uncomfortable” that the focus had been on him since his visa was first cancelled on arrival at Mebourne's airport on January 6.

“I hope that we can all now focus on the game and tournament I love,” he said.

The national federation that runs the tournament, Tennis Australia, said it respects the decision of the Federal Court. “We look forward to a competitive and exciting Australian Open 2022 and wish all players the best of luck,” it said in a statement.

A deportation order also usually includes a three-year ban on returning to Australia.

In Serbia, President Aleksandar Vucic said the hearing was “a farce with a lot of lies.”