Bradford on 15-day trial in Portugal 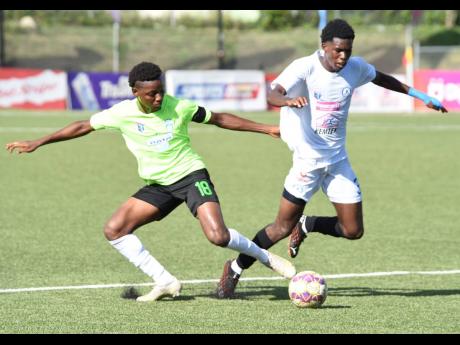 Ian Allen
Shaqueil Bradford (left) of Waterhouse and Mount Pleasant’s Ladale Ritchie in a keen tussle for the ball during a first leg semi-final match in the 2021 Jamaica Premier League season.

The 21-year-old Bradford, who is a former Manning Cup standout at Camperdown High School, was the joint leading goalscorer in the Jamaica Premier League last season along with Harbour View’s Oquassa Chong and Mount Pleasant United’s Jourdaine Fletcher with six goals each.

Waterhouse’s General Manager, Kerry-Ann Robinson, said the club is delighted at the opportunity for Bradford because this is a great chance for him to secure an overseas contract.

“We are excited for this opportunity. Shaqueil is a young talented player. We expect him to do well on the trial,” said Robinson.

“I think that with his talent, we are hopeful for a positive outcome from this trial,” she said.

Robinson added that Bradford, who is on his first overseas trial, is adapting well to cold temperatures in Portugal because he is very determined to secure a professional contract overseas.

She also noted that the Waterhouse club will also miss his goals at the start of the Jamaica Premier League season.

“When I last spoke to him his only challenge thus far was the temperature, but he said he is pushing himself hard to cope with the weather,” Robinson said.

“Shaqueil is extremely talented. As joint leading goalscorer last season, his impact will be missed,” she said.

“However, the beauty about the Marcell Gayle-led Waterhouse team is that we have depth, and other players will provide coverage,” Robinson said.