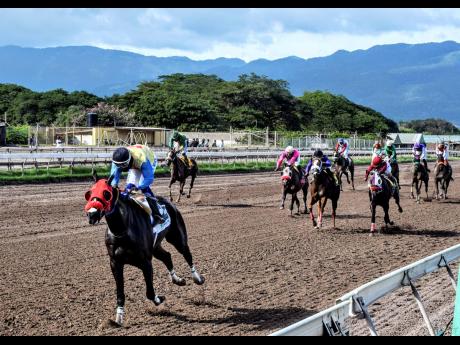 ROBERT Halledeen notched his sixth winner in three race meets at Caymanas Park yesterday, including an overnight-allowance sprint with overwhelming favourite ONE DON for trainer Gary Subratie, joining Dane Dawkins on seven atop the standings.

Overshadowed by Dawkins’ four-timer on Saturday, particularly their showdown in the St Catherine Cup won by PATRIARCH, Halledeen, who placed second aboard the winner’s stablemate, GOD OF LOVE, reclaimed his roost with back-to-back winners for the third consecutive meet .

Halledeen first used CHRISANLI to easily beat $250,000 claimers at five and a half furlongs. Then he cruised down aboard ONE DON, pouncing on FEARLESS CHAMPION at the top of the lane in the following event at six furlongs.

Clearly better than the small field, which was restricted to horses who have never won an overnight allowance, United States-bred ONE DON hit top stride a furlong and a half out, winning by almost four lengths in 1:13.1

Halledeen’s form, winning 28 races in the last quarter of last season, earning him a spot in reigning three-time champion trainer Anthony Nunes’ barn, could see him challenging champion Anthony Thomas for the riders’ title this year.

Former champion Dane Nelson rode his first winner on winter break in Jamaica from Century Downs in Canada. The three-time Jamaican champion won the second event astride Gresford Smith’s 1-5 favourite, BLOODSWEATANDTEARS, at seven and a half furlongs.

Racing continues at the weekend with a Saturday meet.