Pupil gets the better of teacher

Edwin Allen, STETHS to face off in Ben Francis final 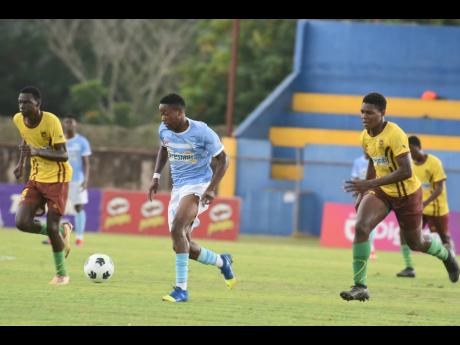 TAFARI BURTON, coach of Edwin Allen High School, got the better of his former coach with a 4-0 win over Manchester High in yesterday’s ISSA Ben Francis Knockout Cup semi-final at the STETHS Sports Complex in Santa Cruz yesterday.

Burton said getting such a big win over a champion coach like Vassell Reynolds to get to the final is a great accomplishment for him and his team.

“He is a past daCosta Cup and Flow Cup (now Champions Cup) winner, so everyone knew what I was up against. What many did not know is that at Edwin Allen, as a player, he was my first daCosta coach. It was an exciting feeling to play against him,” Burton said.

“It’s (beating Reynolds and getting into the final) a happy feeling. The boys really tried their best to follow instructions today. We tried something new with a tweak in the system of play and the boys did well to get it right today,” he added.

Edwin Allen was gifted the lead just six minutes into the contest with a goalkeeping blunder that Richard Henry capitalised on. They held that 1-0 lead going into the half-time break.

The second half saw a lot more excitement starting with Henry netting his second in the 60th minute. Sixteen minutes later, Jahiem Harris extended the lead to three with a brilliant free kick around what looked like a poorly positioned wall. Akeem Mullings put the icing on the cake in the second minute of stoppage time.

The result meant the wait for their first senior schoolboy football title continues for Manchester. While disappointed, Reynolds believe it was a good season.

“When you reach this stage of the competition, one expects you to take that further step into the final and possibly win the title. We were without two of our better players due to injuries and I think that hurt us in midfield. Edwin Allen took advantage of that and once we conceded that first goal from a goalkeeper error, we were behind the eight ball.

“However, I want to look at how well we would have done this season. Nobody expected us to be vying for a title, so we did well. However, it was a disappointing end in terms of our performance today,” he added.

In the second game, hosts STETHS recorded the double over Frome Tech with a 1-0 win to book a spot in the final of a competition they have won six times since 2015.