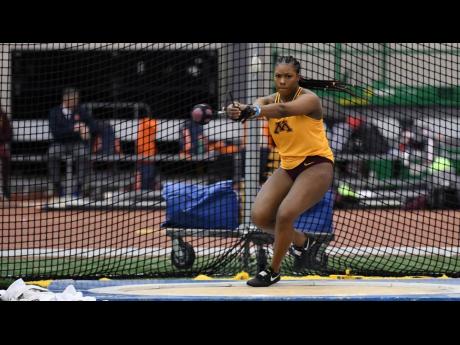 “I WANT to be an Olympian. I want to know what it feels like to be competing for Jamaica as an Olympian.”

Those are the sentiments of Jamaican hammer thrower Nayoka Clunis, who is pursuing this worthy objective with time management as her most important tool.

The 26-year-old Clunis opened her season with a 65.16 metres effort at the end of March. Since then, she has begun to see herself in black-green-and-gold at the World Championships in Eugene, Oregon, and the Commonwealth Games in Birmingham, England. “I’ve honestly been having them on my mind a lot more recently, especially with opening with 65m. The last few weeks have been challenging with the weather and everything, so I have not tapped into my full capabilities of getting a smooth throw in, in a competition, so I’m adjusting to that, but I’m really looking forward to making one, if not, both teams,” said the 2018 and 2019 Jamaican champion.

She added: “Honestly, I was not expecting 65m at that time because it was just a season opener and seeing that I had a rough fall and a rough start of the spring, not being able to lift because of injury.Recent relief from months of back pain has made a difference, leading her to say: “It’s been easing up a little bit, so I’ve been able to do a little bit more in practice.”

By day, she is the assistant director for operations for track and field at Penn State University. Wrapped around that is an effort to surpass her personal best of 67.40 metres and to reach the World Championships qualifying distance, 72.50 metres. “I’m really good with time management, especially coming off doing three events in college, being a student-athlete, interning, or volunteering, I’ve managed well over the years. So handling being the assistant director of operations, training to be a professional athlete, and also having my side business, it’s a lot and sometimes I feel like I’m worn thin because I’m doing it all, but I know what I want, and I’m trying my best to work as hard as I can to get it,” she explained.

Her goal is to do what only Daina Levy has done: compete for Jamaica in the Olympics in the hammer.

Levy, who holds the national record at 71.48 metres, has helped Clunis along the way. “When I was in junior college, Daina was a huge mentor for me in learning the event,” Clunis recalled of her time at Cloud County Junior College. “Whatever questions I had, I would ask Daina’s opinion on how to fix this, how to fix that, and she was really helpful.”

Levy’s presence at the 2016 Olympics fired Clunis’ ambition. “2016 was really insightful to say, hey, there’s a Jamaican here throwing 71 metres, going to the Olympics. I can be like that,” asserted the thrower who competes next in Tucson, Arizona, on May 19-21.