Blackwood holds firm as Scorpions go to lunch at 90-3 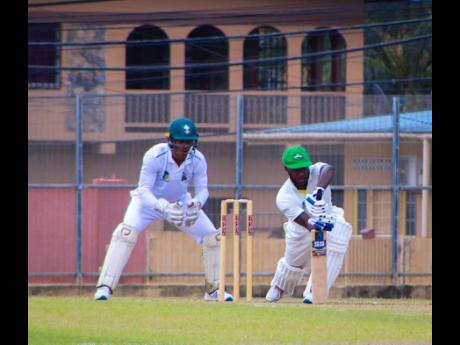 Middle-order batsman Jermaine Blackwood will be looking to press on from his decent start, as the right-hander heads into lunch on the first day of the fourth round West Indies Championship match against the Guyana Harpy Eagles at the Diego Martin Sports Complex on 31 in the Jamaica Scorpions total of 90 for three.

Captain John Campbell also started positively as the Scorpions won the toss and decided to bat, however, the left hander fell lbw to off-spinner Kevin Sinclair for 37. Fellow opener Leroy Lugg failed with the bat, as he was caught by Gudakesh Motie off pacer Dimitri Cameron for five.

Sinclair picked up his second wicket of the innings when he trapped Oraine Williams in front for a first-ball duck.

Left hander Paul Palmer is the other not out batsman on 12. The Scorpions brought in Oraine Williams to replace Nkrumah Bonner with Alwyn Williams coming in for Brandon King.

Over at the Queens Park Oval, the Leeward Islands Hurricanes were 72 for four at lunch against the Windward Islands Volcanoes.

Preston McSween has claimed two wickets so far. Devon Thomas was bowled by McSween for 25 and opener Kieran Powell, got to 19. Opener Montcin Hodge made 14.

Over at the Brian Lara Cricket Academy, the Trinidad & Tobago Red Force are in a spot of bother at lunch against the Barbados Pride. They are 56 for five with seamer Justin Greaves bagging two wickets for 14 runs. Yannic Cariah has so far top scored with 13 with Jason Mohammed making 12.