Solozano misses out but McSween entertains in draw 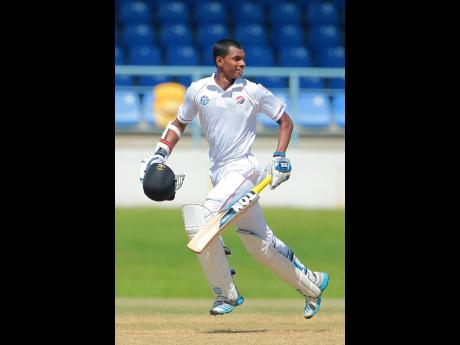 Opener Jeremy Solozano fell short of triple figures, but captain Yannic Cariah and tail-ender Preston McSween added fifties of their own to thwart Bangladesh on the final day of the three-day tour match here yesterday.

Resuming on 83 with the CWI President’s XI on 201 for four, the left-handed Solozano perished for 92, after facing 218 deliveries in more than five hours and striking 11 fours.

Cariah, unbeaten overnight on 21, made 56 while McSween, a specialist left-arm swing bowler, entertained himself with a cavalier unbeaten 50 from 62 balls, which contained eight fours and a six.

Colin Archibald, batting at number eight, produced a dashing unbeaten 40 from 44 balls as the President’s XI piled up 359 for eight declared in reply to Bangladesh’s 310 for seven declared.

In a second time at the crease, the Asians reached 47 for one to complete a predictable draw in the encounter at Coolidge Cricket Ground.

Solozano, who made his Test debut last year against Sri Lanka but never batted after being injured in the field, stretched his fifth-wicket stand with Cariah to 66 before becoming the first casualty of the day, leg before wicket, to recently recalled seamer Mustafizur Rahman (3-34).

Two balls later, Mustafizur accounted for Jeremiah Louis without scoring, but Bangladesh’s hopes of wrapping up the hosts’ innings quickly were soon dashed by a string of frustrating partnerships.

First, Cariah put on 35 for the seventh with Archibald, who played with gay abandon, striking half-dozen fours and two sixes.

When the left-handed Cariah became Mustafizur’s third victim after hitting four fours and a six off 119 balls, McSween entered to add 25 with Archibald and a further 66 in an unbroken ninth-wicket stand with Jomel Warrican (21 not out).