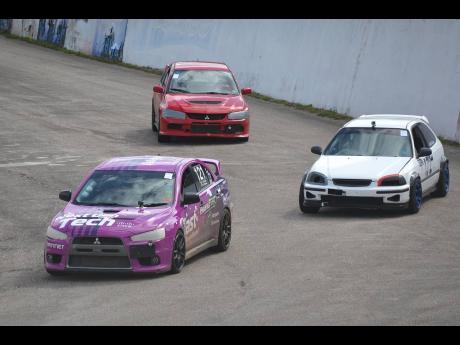 Carl Gilchrist photo
Action on the track at the Dover Raceway, one of two racing facilities in Jamaica.

JAMAICA’S MOTORSPORT community is calling for help from the Government to build a motorsport park in an effort to grow the sport locally and increase revenue. Jamaica Millennium Motoring Club (JMMC) president, Stephen Gunter, said Jamaica is...

JAMAICA’S MOTORSPORT community is calling for help from the Government to build a motorsport park in an effort to grow the sport locally and increase revenue.

Jamaica Millennium Motoring Club (JMMC) president, Stephen Gunter, said Jamaica is missing out on the benefits of a major motorsport park and should waste no time in making the necessary moves to get the park built.

“Jamaica is in need of a dedicated motorsport park; a facility where multiple genres of motor sport could take place on any or one weekend,” Gunter said. “We are far behind other Caribbean and CARICOM countries in this regard – a large facility of a couple hundred acres or so where we could have circuit racing, go-karting, sprints, that sort of thing occurring regularly at the location.”

Jamaica Race Drivers Club (JRDC) president Junior Barnes said Caribbean countries with such facilities, such as Barbados’ Bushy Park, are bringing millions of US dollars to their countries from hosting major tournaments.

He said if Jamaica builds a similar park, the country could generate similar figures and increase employment.

Barnes said in order for this to be possible, the Government will have to take the sport more seriously.

“We would like the Government to find some land and invest in motor sport just as how they would invest in football and track and field; it’s a need,” he said. “So we would mainly like the Government to invest in (motor sport) and accept us as athletes and a part of Jamaica because we have Jeffrey Panton, Fraser McConnell, Sarah Misir (and) Alex Powell, who is a teenager. These are all racers racing under the Jamaican banner,” he said.

Rally Driver McConnell echoed the call for the park as he said this will also help to nurture local talent.

“A dedicated motorsport park with a diverse set of facilities would allow for not only local competitions to grow, but also the possibility for international events to be held,” he said.

“Although this will be a big investment, I know that Jamaica would be an attractive destination for many.”

Barnes said he has made attempts to speak with Sports Minister Olivia Grange, but because of the pandemic and the minister’s schedule, he has been unsuccessful in setting up a meeting with her to speak about the issues of motor sport including, building a motorsport park and cutting the tax on the importation of equipment for the sport.

“We would like the ministries and the Sports Development Foundation (SDF) to have a sit-down with us about the plan for the future of motor sport,” he said.

SDF General Manager Denzil Wilks said despite these wants from the local motorsport community, SDF has not received any recent request from them.

“The ability of the SDF to assist any sport is a function of resources as well as the extent of organisation displayed by the national sporting body,” Wilks said.

“SDF has supported motor sport but no request has been made for assistance in recent times.”