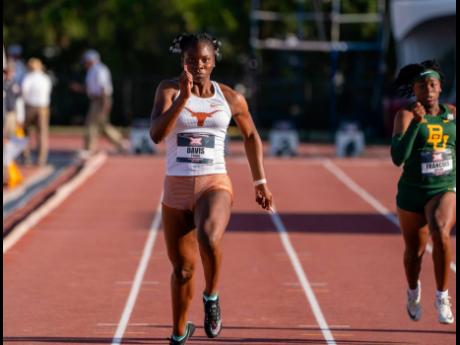 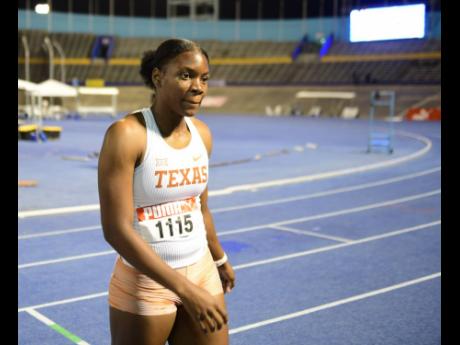 Gladstone Taylor
Kevona Davis of the Universiy of Texas moments after competing in the final section of the women's 100 metre heats at the JAAA National Senior and Junior Athletics Championsip inside the National Stadium last evening.
1
2

Former Edwin Allen High School standout and now University of Texas sprinter, Kevona Davis, is not worried despite a slow first-round qualification in the Women’s 100 metres at the National Senior and Junior Athletics Championship inside the National Stadium yesterday.

Davis was third in her heat, clocking a pedantic 11.41 seconds, to finish behind Sprintec’s Shashalee Forbes (11.23) and Tumbleweed’s Natalliah Whyte (11.37).

The 2017 World U18 Championships bronze medallist chalked up the performance to a bit of tiredness and to a poor start, both things she expects to rectify in this evening’s semi-finals.

“I really can’t say what went wrong but the previous start I had was much better,” said Davis after the exertion.

Davis seemed to get out of the blocks very slowly and then seemed to have a few struggles with her drive phase before getting into her running.

Even then, the powerful sprinting she is associated never came and she could not get back to the lead.

“I’m fresh from a whole week of competition so it wasn’t my best, but I’m still now worried,” she said.

The other semi-final will pit Elaine Thompson Herah against Shericka Jackson. Kemba Nelson, Jodean Williams, Ashanti Moore, Natasha Morrison, Kasheika Cameron and Shockoria Wallace will also be vying for a place in the final.