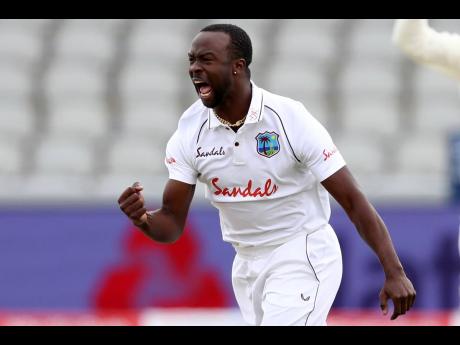 Veteran seamer Kemar Roach marched into the 250-club with a three-wicket haul here yesterday, which helped push Bangladesh closer to defeat in the second Test at the Daren Sammy National Stadium.

Without a wicket in the first innings after entering the contest on 249 wickets, the Barbadian, who turns 34 next Thursday, handed himself an early birthday present by grabbing three for 32 as Bangladesh slid to 132 for six at the close of a rain-hit third day.

Fast bowler Alzarri Joseph maintained his form with two for 31, leaving the visitors still requiring a further 42 runs in order to avoid another heavy defeat on today's penultimate day.

Left-hander Kyle Mayers had earlier struck 146 as West Indies, resuming the morning on 340 for five, were dismissed for 408, about 45 minutes after lunch.

Roach then snatched the first three wickets to fall in Bangladesh’s second innings, sending back Tamim Iqbal (four), Mahmudul Hasan Joy (10), and Anamul Haque (four) as Bangladesh slumped to 32 for three at tea – taken 20 minutes early due to rain.

He now lies sixth on the all-time West Indies list on 252 wickets, seven behind Joel Garner.

“I still have some ways to go. I have some other goals to reach, but right now I’m just living the moment, enjoying the moment. The team is doing well as well so I’m extremely proud of the day.

“I just want to continue to work hard tomorrow, obviously, come back and help the team win again in another Test match.”

Rain allowed just 50 minutes in the first session, West Indies losing two wickets to reach 376 for seven at lunch and stretch their overnight lead even further.

They suffered an early setback when Joshua Da Silva, resuming on 26, missed a sweep at off-spinner Mehidy Hasan Miraz (3-91) in the morning’s second over and was adjudged leg before wicket for 29.

And Joseph lasted all of nine deliveries for his six before pulling impressive seamer Khaled Ahmed (5-106) to Litton Das at mid-wicket.

Unbeaten on 140 at the break, Mayers perished in the third over after the resumption, chipping a simple catch to mid on off Khaled, and the innings ended swiftly as Anderson Phillip (nine) and Jayden Seales (five) offered little resistance.

In deficit by 174 runs, Bangladesh were in early trouble when Tamim drove at a wide one from Roach and nicked off to Da Silva at four for one in the third over.

And when Mahmudul Hasan Joy edged to Jermaine Blackwood at third slip and Anamul was leg before wicket to one that nipped back, Roach had given West Indies a stranglehold.

Seales trapped Litton Das in front for 19 courtesy of DRS after the break before Najmul Hossain struck 42 in a 47-run, fifth-wicket stand with captain Skakib-al-Hasan (16) to prop up the innings.

Najmul had faced 91 balls and struck eight fours when he edged a drive to Da Silva off Joseph, who then had Shakib caught on the second attempt by John Campbell at second slip, off the first ball following the final drinks break.

Mehidy Hasan Miraz not out 0