Goule: My main focus is the World Championships 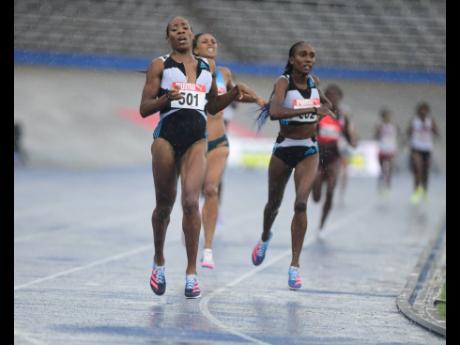 Gladstone Taylor/Multimedia Photo Editor
Chrisann Gordon-Powell (left) crosses the line ahead of Natoya Goule (right) to win the women’s national 800 metres title in two minutes 00.35 at the National Stadium on Sunday. Goule was second in 2:00.83.

Eight-time national 800 metres champion Natoya Goule was unable to reclaim her title at this year’s JAAA Senior and Junior National Championships but she says her main focus is to perform well at the World Athletics Championships in Eugene, Oregon, next month.

“It was pouring so that had a big impact on racing and if you’re my size and running in the rain, water coming into your shoes you know that it is kind of difficult to run,” Goule said. “But I am not looking on this (National Championships) because I am going to the World Championships and that was the aim.”

Goule, who is currently ranked 23rd in the world, finished second in 2:00.83 minutes behind former 400m runner Chrisann Gordon-Powell who clocked 2:00.35 to claim her first national 800m title while Adelle Tracey was third in 2:01.18.

Goule, who had won every national 800m title since 2013, said she is still confident going into the World Championships.

“I haven’t lost the national title for years but, you know, you have to win some and lose some,” she said. “I am confident going into the World Championships because after running in the rain and running two minutes and still feeling strong, I know that I am going to go out there and represent Jamaica.”

The 2019 Pan American Champion said she hopes she will get Jamaica’s first medal in the 800m at the World Championships but she has to work on executing her races properly.

“I just have to execute my races differently, because I think that was the problem and I just need to stay confident and just don’t panic or anything, (but) just run my race and I know that it will be fine,” she said.

Goule has been the only Jamaican to compete at the World Championships in the 800m for over a decade and made the finals in 2019. This year she will be joined by fellow Navasky Anderson in the men’s event and she said she is delighted.

“I am feeling excited because I’m like ‘OK it’s not just me alone for the 800m no more!’, you know you have other people coming so I am really excited about that,” she said.

Goule, 31, said she is happy with the development of the 800m event among Jamaicans and she believes the country will continue to do well in years to come.

“I am getting older and I am not going to be in this sport long, so it is good to see the young ones are coming up,” she said. “I am just happy knowing that Jamaica is going to be in good hands.”

Goule is the only Jamaican woman with the automatic qualifying standard of 1:59.50 for the World Championships 800m, with her fastest time this year being 1:59.31.