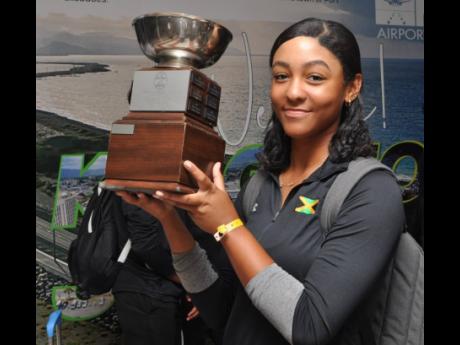 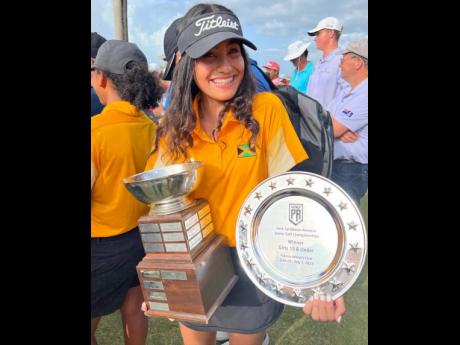 It wasn’t just one title that Jamaica secured after the three-day event, but two, as Emily Mayne and Samantha Azan outlasted their regional rivals to claim the girls’ 18 and under and girls’ 15 and under categories, respectively.

The pair’s effort helped the Jamaica team to finish third overall with 117 points behind eventual winners Puerto Rico with 168 points. Second place went to the Dominican Republic with 119.

Mayne’s march to victory came after carding rounds of 74, 70 and 80 for an 11 over par score of 224. Her second-round 70 was the only under-par score by any of the females at the championships.

Barbados’ Emily Odwin was also tied for first after also shooting 11 over par with scores of 73, 76 and 75.

For Mayne, securing the first female category title is a dream come true in her young golfing career.

“It means a lot being the first Jamaican to win it. I am happy with how my work has paid off. To also see that my name was the only female in red numbers on the scoreboard feels good,” said Mayne.

Jamaica’s other 18 and under entrant, Eryn Blakely, finished seventh in the category.

Teammate Samantha Azan was also in scintillating form, as she secured the 15 and under title by one shot.

Compatriot Mattea Issa carded 76, 75 and 81 and ended up tied for three-way second place in the category along with the Puerto Rican pair of Victoria Rivera and Krishny Elwin.

For Azan, her measured approach over the three rounds paid dividends on her way to her historic win.

“I made sure I was calm and maintained my composure and had a positive attitude with every shot. I just went out and trust my swing because I trained hard and dedicated myself to this championship,” said Azan.

Alessandra Coe, who represented the country in the 13 and under category, came eighth.

Lue was joined in the group by Aaron Ghosh and Lek Drummond who finished 12th and 14th, respectively.

Rocco Lopez placed eighth in the 18 and under category. He scored rounds of 78 on each of the three days for a total of 234. Teammates Trey Williams and Ahman Dhiman came in 10th and 14th, respectively.

The youngest male team, the 13 and under category, was represented by Kemari Morris and Shasa Redlefsen who placed eighth and ninth, respectively.

National coach Jason Lopez was ecstatic about the performance of the females and the overall effort of the team.

“We were the best English-speaking Caribbean team so that means our programme is outpacing Trinidad and Tobago, Barbados, the Bahamas, Turks and Caicos and Cayman, so I am looking forward to what there is to come,” Lopez said.