Jamaica off the mark in Rising Stars Under-19 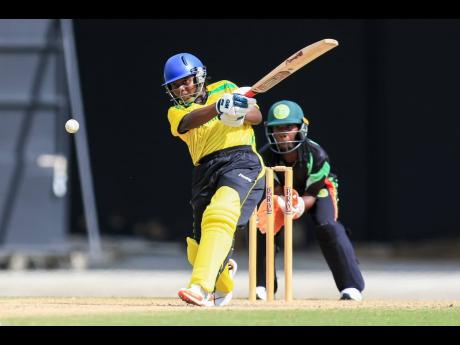 CWI Media photo
Lena Scott of Jamaica goes on the attack during her innings of 43 against Guyana in their Cricket West Indies Rising Stars Women’s Under-19 match at the Brian Lara Cricket Academy yesterday.

Jamaica’s Under-19 women’s team secured their first win of the Cricket West Indies Rising Stars Women’s Under-19 tournament following an 18-run victory over Guyana at the Brian Lara Cricket Academy in Trinidad and Tobago yesterday.

The win saw the Jamaicans rebounding from their opening loss against the United States. A fine batting display by Lena Scott backed up by some good bowling from Kimarie Campbell set up yesterday’s win for Jamaica.

Asked to take the first strike, the Jamaicans posted a respectable 115 for three off 20 overs, with Scott top-scoring with 43 runs from 56 balls with six fours. She got good support from Player of the Match Kate Wilmott who was left not out on 29 from as many balls with two boundaries.

In reply, Guyana, set a revised target of 106 off 18 overs due to a rain interruption, could only manage to get to 87 for four, with Campbell bagging two wickets for seven runs in three overs.

There was a wicket each for Wilmott and Brianna Plummer.

“We had a chat with the girls and that motivated them to come out and show their true mettle. In the first game against the United States, they were nervous but all that went out the window in this game and you can see how they were playing with more confidence by diving around and enjoying the cricket,” said coach Carl Brissett.

Over at the Diego Martin Sports Complex, the Windward Islands defeated the Leeward Islands by 122 runs.

The Windwards, who were asked to take the first strike, posted a formidable 176 for eight in their allotted 20 overs with West Indies representative Jannellia Glasgow top-scoring with 38 and Namiah Marcellin getting 37 with extras adding up to a whopping 53 runs.

In reply, the Leewards were blown away for just 35 runs in 13.5 overs, with Claxton the only batter to reach double figures. She made 11.

The match between the United States and Barbados was abandoned due to rain.