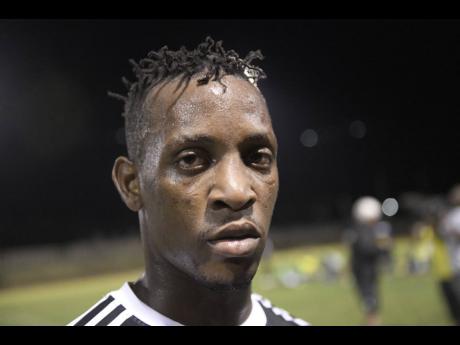 During the 2021-22 Costa Rica Primera Division season Jamaican forward Chevone ‘Messi’ Marsh spent a lot of time on the sidelines for former club A.D.R. Jicaral, but not because of injury or suspension.

The 28-year-old spent the time earlier this year seeking a work permit for 2022.

For the Apertura tournament in Costa Rica, from August to December last year, Marsh figured prominently for A.D.R. Jicaral playing 22 matches after moving from El Salvadorian club, A.D. Chalatenango. At that time, he said, a work permit was not needed.

However, for the January to May 2022 Clausura tournament, he only featured in four games. The rules for overseas players changed for 2022 and Marsh needed a work permit to continue playing for his club. It took him almost four months to receive the work permit and the matter was reported to FIFA by his club. According to the former Cavalier forward, FIFA said it was unfair as he was the only foreign player without a permit and he should be allowed to play with or without the permit.

Marsh, who was also restricted from training by the immigration authorities, said despite the frustration he kept his focus and had a fairly good end to the season.

“It was frustrating being away from the pitch for three to four months. During the time when my work permit was being sorted out, immigration stopped me from training so I didn’t have much physical condition to be at my best,” he said.

Overall he scored five goals and provided eight assists for the club, but the time he took to obtain his papers for the second half of the season is still a mystery, he said.

“Why it took so long is a question I could not answer. The management staff were on the federation every day. But it was all about the interview and the time (date) they gave me, and they denied me not once but twice. But I still tried to keep calm. When they granted me the opportunity to play there were just four games remaining in the season.

“I finished the season with five goals and eight assists, but I missed four months of football and that was missing out on a lot but I am still grateful,” he said.

Despite his limited time on the pitch this year, Marsh created a big enough impression that top Costa Rican club Santos de Guapiles came calling for his services. He recently signed a two-and-half seasons deal with Santos.

“People acknowledged that I was a really good player after seeing me in the league. So sometimes God’s plan is to slow you down so you can self reflect and during that time I saw things that I needed to do to improve. I had conversations with the coaches and tried to get better,” he said.

He added that he is in a much more comfortable space now, and even his family has fully approved of his latest move.

“The managers trust me although I am not the best speaker of Spanish. To overcome this (language barrier) the coach would usually take me aside with someone who can speak English and then explain his tactics to me,” Marsh said.