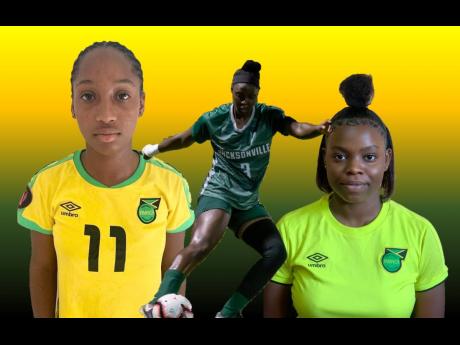 THREE YOUNG Reggae Girlz have received scholarships valued at thousands of United States dollars to help with furthering their educational goals this year.

Richards, 18, who plays for Jamaica’s U20 teams and is currently with Frazsier’s Whip Football Club, will be heading to Hill College in Texas this fall and sees the contribution as being of significant assistance.

Hailing from Waterhouse in a community called Samacon, Richards started out playing for Excelsior High School, winning four titles there.

Richards has her sights set on making the senior team and eventually signing to an overseas outfit.

Walters, 22, who attends Jacksonville University in Florida came up through the ranks, playing with the U15, U17 as (captain), and the U20 teams.

Walters, who received her Rooted2Rise Scholarship from the Foundation in May, said it allowed her to cover the cost for her Optional Practical Training application.

Optional Practical Training is a benefit available to international students in the United States who are enrolled in or completing a degree programme.

Currently enrolled in that programme, she said without the Reggae Girlz Foundation investing in her future, she wouldn’t have the opportunity to gain invaluable work experience.

“The foundation provided a pathway for me to reach some of my future goals, both professionally and personally and for that I am grateful,” said Walters, who is now looking forward to pursuing a Master of Science in Applied Business Analytics this fall.

Hailing from Spanish Town and a past student of St Jago High School, Walters went on to Jacksonville University and was a part of the women’s soccer team as an undergrad.

“Now, a first generation graduate, I’d like to think I’ve come a long way and want to sincerely thank everyone who has been a part of my journey,” are her grateful words.

Jones, 19, goalkeeper for the Reggae Girlz will head to Iowa Lakes Community College this fall and for her, the scholarship is more than receiving the money – it’s confirmation that the Foundation sees potential in her.

“It will help with my travel and educational expenses and it will also encourage me to continue to be determined, resilient and passionate for success,” she quipped.

Jones who hails from the community of Drewsland, Kingston has been in the Reggae Girlz programme since 2019, something she never envisioned.

“I started out as a netballer in high school, never thought I would start playing football because even though it runs in the family, it wasn’t my thing, but my high school football coach wanted a goalkeeper and he asked me. I was sceptical at first but I tried and from I was 15 years old up to now, I’ve been at it,” she reminisced.

Now, she is looking forward to making a big imprint as well as taking her game to a higher level and creating wealth in the process.

President of the foundation, Michelle Adamolekun, commenting on the awardees, said they were selected based on three attributes.

Strong recommendations from their coaches and principals, they were focused, determined and demonstrated a passion and drive to achieve their short- and long-term goals.

“They also had strong personal statements that highlighted their accomplishments to date, character, strengths and educational and athletic goals,” she noted.