‘I’m one of the greatest’ 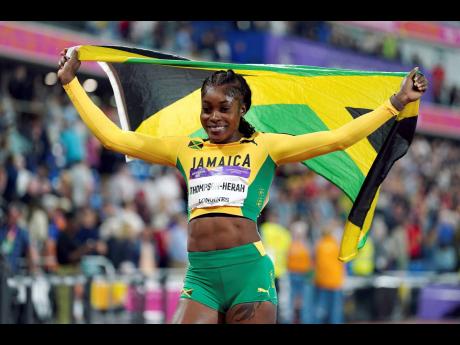 AP
Jamaica’s Elaine Thompson-Herah celebrates after winning the Women’s 100m final inside the Alexander Stadium at the Commonwealth Games in Birmingham, England, yesterday. 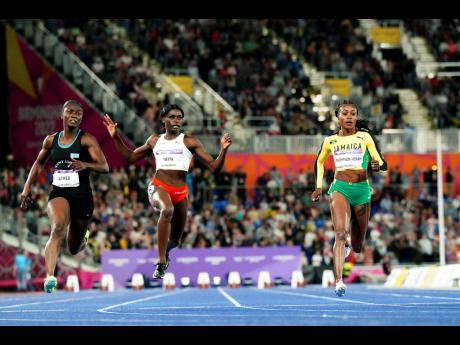 ELAINE THOMPSON-HERAH put any disappointments from the recent World Athletics Championships in Eugene, Oregon, behind her by storming to an emphatic victory in the Commonwealth Games 100m final in Birmingham, England, yesterday.

Jamaica’s double Olympic Champion finished third, behind compatriots Shelly-Ann Fraser-Pryce and Shericka Jackson in Eugene, but was not to be led in Birmingham as she tore out of the blocks to clock a time of 10.95 seconds, finishing six-hundredths of a second ahead of St Lucia’s rapidly rising 21-year-old national record holder, Julien Alfred.

Thompson-Herah has earned great kudos for appearing at a championships that has been starved of some of the world’s greatest track and field stars.

But the 30-year-old second-fastest woman of all time and quickest alive commented:

“I have to give God thanks for being able to come off of one championship, where I had to run many rounds, to another with many rounds.

“It’s been a challenging season ,but I’ve managed to pull through.

“Sometimes to be a champion you have to challenge yourself.

“I know what I’m capable of and know that I’m one of the greatest sprinters of all time.

“I believe in showing up and putting on a show, and to get back on top was difficult, but I still managed to claim two medals at the World Championships, and so far, one here, and I am grateful for being able to do that.

“I’m a 100-200 sprinter and intend to come back in the morning,” said Thompson-Herah

The Commonwealth gold medallist was referring to the heats of the 200 metres, where she will attempt a sprint double.

Earlier, Thompson-Herah cruised through her semi-final, overcoming a slow start and then easing up while still winning by several metres in a time of 11.05 seconds.

Great Britain’s Daryll Neita, who gained a massive cheer from a partisan home crowd after setting a new personal best of 10.90 in winning her semi-final, came home third, while Jamaica’s other finalist, Natalliah Whyte, was eighth in 11.32.

Whyte squeezed into the final in the last qualifying spot, crossing the semi-final finishing line in 11.17 behind winner Neita’s lifetime best.

Remona Burchall edged fourth place in the opening semi-final, but her time of 11.48, 35-hundredths down on her season’s best, was insufficient to gain a passage to the medal decider.

There were no Jamaicans in the men’s final run a few minutes earlier after former Commonwealth champion Kemar Bailey-Cole failed to make it into a thrilling men’s 100m final, won by current African champion Ferdinand Omanyala in 10.08.

Bailey-Cole, who has had to overcome serious hamstring and debilitating virus problems since winning gold in Glasgow 2014, could not make the top two automatic qualifiers from his semi-final - finishing fourth - and his time of 10.25 was eclipsed in a quick final qualifier, which provided both of the ‘fastest loser’ places.

The other sprinter for the Caribbean country, Conroy Jones, also found the going tough, finishing fifth in his semi-final heat in 10.33.