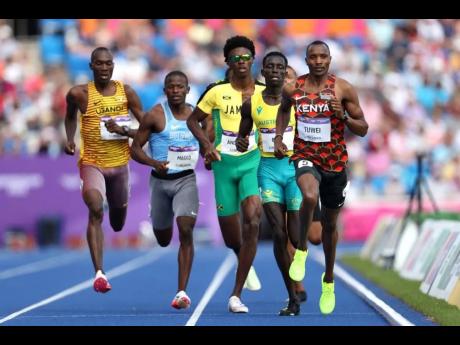 RISING 800-METRE star Navasky Anderson put his recent World Championship disappointment behind him by battling through to Sunday’s Commonwealth Games final as the fastest non-automatic (top three) qualifier from the three heats.

The 22-year-old two-lap specialist clocked 1:47.79 in the second of three heats and had a nervous wait to see whether that time – well below a 1:45.02 lifetime best set earlier this year – would facilitate progression.

It turned out to be the third fastest of all the qualifiers, so nerves turned to relief when Anderson’s progress was confirmed and he reflected:

“I looked at what I did in Eugene when everyone came crashing down on me over the first 200m (after the break from lanes) and spoke with some people who have much more experience than me, then looked at what I did wrong, corrected it and made a much smoother transition this time.

“Eugene was my first bad race of the season but I have tried to learn from the experience and put it into practice here.

“It will be my first global championship final.

“I have always been inspired by Usain Bolt and David Rudisha (World 800m record holder) and guess that I try and be a combination of both.”

“Representing my country, my family and myself here is a great honour and the environment and atmosphere is fantastic, just like it was at the World Championships.”

In the meantime, all three of the island’s 400m hopefuls made it safely through to the semi-finals.

Powell, marginally the youngest of the two 21-year-olds who went to high school and contested junior championships together, had plenty of work to do as, with 100m to go, he was one of four vying for two automatic places in Friday’s semi-finals.

But, following a powerful finish to clock 46.14 seconds, Powell commented:

“I’m happy just to get through the first heat … I wasn’t too worried as I looked around and saw that no one else seemed to have much more to give so I just stepped it up.”

Cox, barely three months older, also stormed down the home straight to win the opening heat in an impressive (for a qualifier) 45.51.

Allen’s following race victory was most comfortable of the three, qualifying in a season’s best 45.18, indicated that he is getting back to his best following hamstring problems which have haunted him since setting his 44.13 personal best in 2018.