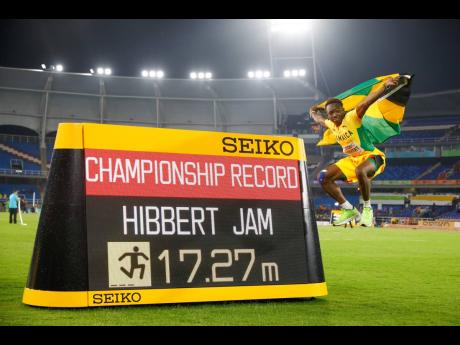 Courtesy of World Athletics
Jaydon Hibbert celebrates the championship record he set in the men’s triple jump at the recent World Under-20 Championships in Cali, Colombia. 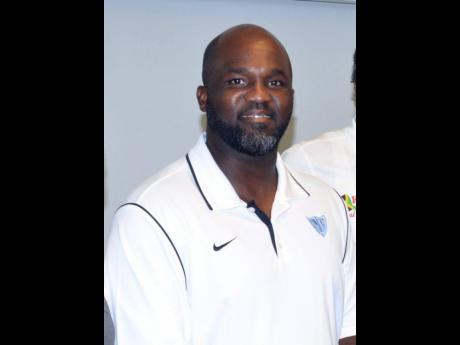 Jaydon Hibbert took just one attempt to win the triple jump with a meet record last week at the World Athletics Under-20 Championships in Cali, Colombia. After his monumental first-round jump, a personal best 17.27 metres to annex the title, he...

Jaydon Hibbert took just one attempt to win the triple jump with a meet record last week at the World Athletics Under-20 Championships in Cali, Colombia. After his monumental first-round jump, a personal best 17.27 metres to annex the title, he stopped jumping. Jeremy Delisser, his coach at Kingston College, said the youngster had to take a safety-first approach to the competition.

“It was actually part of the plan,” Delisser explained. His athletes are programmed to make big efforts in the first round.

“In particular in the final, because, after the qualifying, he had said the track was a bit tough. He got a little jolt in the knee and the ankle, so even more so, I just spoke to him and said to him, that first jump, just ease the pressure off, get one out there,” the accomplished coach related.

Hibbert carried out his mission with aplomb.

“As a matter of fact, I think I said to him, ‘get going from ball one’. That’s what I said to him and he actually went and executed to a T,” Delisser said of the tall lad who had placed second last year.

Asked why the ISSA/GraceKennedy Boys and Girls’ Championships, Penn Relays and Carifta champion didn’t try to surpass the national Under-20 record of 17.29 metres by James Beckford later in the Cali final, Delisser explained that they approached the task with caution.

“To be honest, I hope he gets it one day. It should be on the cards because he has a couple more years as a junior. So, if he can continue to progress, it should happen,” the coach predicted, “but considering what was happening on the day and what happened in the qualifying, my normal procedure is that you operate for what is best for the athlete in terms of safety and longevity. So, because of how he was feeling coming out of the qualifying, you know, the plan was just to win, first of all, to win as early as possible, to get a personal best on the first jump.”

Delisser is delighted at Hibbert’s success.

“Personally, I’m really happy. There’s a certain feeling of achievement and, for the most part, satisfaction. He has progressed, he has improved.”

Remarkably, the 17 year-old could only make Kingston College’s Boys and Girls’ Championships team last year for the first time. He finished that season by jumping a then personal best of 16.05 metres to take silver at the World Under-20 meet.

His win in Cali follows long jump bronzes in 2018 garnered by another Delisser student, Wayne Pinnock, and in 2021 by Kavian Kerr. For the coach, the signs are clear: Jamaica is coming forward in the jumps.

“That’s one of the things I want to see across the board,” Delisser remarked.