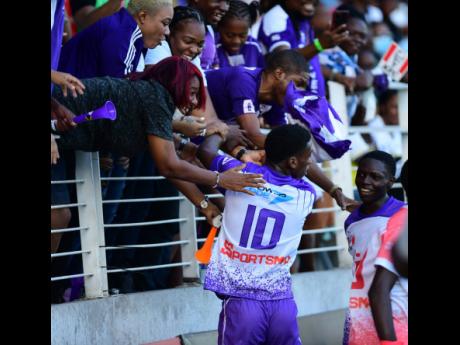 Omar Walker scored the consolation goal for Calabar High in the 76 minute.

Raymond Watson, coach of KC, was happy with team’s performance because of the number of goals scored.

“I am very happy for this victory because we scored five goals and that is a big plus for us,” said Watson. “This is also a nice way to start the competition ... we came away with the three points, so that is also quite pleasing,” he said.

“We were playing against the defending champions and they are quite seasoned, more than us, and we only had six weeks, and so we will get better as the season progresses,” Price promised.

“I think that if we had made better decisions we could have gotten something out of the game. But this is the first match and I am confident that we will bounce back,” he said.

KC outplayed their opponents in the early exchanges but despite creating several scoring opportunities, they failed to hit the target from close range.

The North Street-based institution was finally rewarded when Richards controlled the ball on his chest inside the 18-yard box, before unleashing a powerful shot past custodian Xavier Cooling, to secure a 1-0 lead at half-time.

The ‘Purples’ came out firing on all cylinders in the second stanza and they were quickly rewarded as Richards doubled their advantage with a beautiful left-footed volley past Cooling.

Before the celebrations subsided, Kennedy increased their lead two minutes later when he arrived at the near post to slot home from point-blank range.

Calabar pulled one back when Watson scored for the Red Hill Road-based institution.

However, KC weren’t done yet and they made their overall dominance with additional goals.