Published:Wednesday | September 14, 2022 | 12:11 AMNodley Wright/Gleaner Writer - The post, which is a picture of a group of players in a huddle with backs turned to the camera, has a prominent red writing stating âWe stand with Blake, 9.24.22 will be historicâ. - 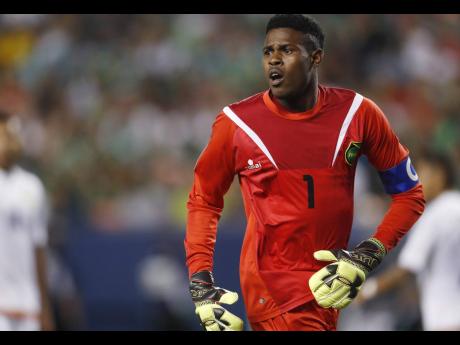 IF A social media post currently making the rounds is authentic, new Reggae Boyz coach Heimir Hallgrimsson will be in for a rough ride. Andre Blake has been captain of the Reggae Boyz for years. However, he has not been named in the squad released...

IF A social media post currently making the rounds is authentic, new Reggae Boyz coach Heimir Hallgrimsson will be in for a rough ride.

Andre Blake has been captain of the Reggae Boyz for years. However, he has not been named in the squad released for Jamaica’s senior men’s national football team’s next match, against Argentina.

September 24, 2022 represents the date that the players who were selected for a friendly international against Argentina are set to assemble and the statement indicates that Blake will have the support of his teammates.

Already, Blake has received strong support from Reggae Girlz ambassador Cedella Marley, who, like Blake, often does not see eye to eye with the Michael Ricketts-led administration and has had run-ins with them.

STAND UP FOR RIGHTS

“How can the captain of our men’s national team not be called up for this historic match against Argentina. Why do I feel he’s being punished for standing up to the Jamaica Football Federation? The whole world is watching @jff_football. You can fool some people sometimes but you can’t fool all the people all the time, and now we see the light STAND UP FOR YOUR RIGHTS,” Ms Marley’s post read as she shared the post believed to be from Blake’s teammates.

Blake, the country’s top goalkeeper and the national team captain, was not named in a 23-man squad for the game which is scheduled to take place in the USA, the country where he plies his trade professionally. Early this month, Blake commented on a post which indicated that Jamaica would name a new coach soon.

“A new head coach with the same federation will ‘prolly’ equal the same results,” Blake’s post read. It is thought the post was the reason for his omission.

But, while it appears Blake is getting support from his teammates, the man himself is not sure.

“I don’t know who made the post but I have seen it and seen it reposted by Ms Marley. I haven’t personally heard from any of my teammates as yet. I have heard from one player, a past player, but that is it,” he told The Gleaner in an interview.

“Directly or indirectly, I have not heard from any of them,” stated Blake, who has been capped in excess of 60 times by the Reggae Boyz.

With or without support, though, Blake is comfortable with his stance.

“I feel no way about that (the lack of obvious support) because I can fight on my own. I may not win but, if I have to do it alone, I will,” he said.

“Together we are stronger but I cannot tell anyone what to do. If you are a professional and you are okay with mediocre performance (from the administration), then it is okay. I know the passion that I have to represent my country, and the public deserves better,” said the man who has represented his country at Under-17, Under-20 and Under-23 before graduating to the senior team.

Several efforts were made to reach JFF President Ricketts by phone for comments for this story, but all were unsuccessful as none of the calls went through.

Like many observers, casual and otherwise, Blake himself is of the view that his omission from this friendly match was because of his comment on social media.

“I am not surprised because I know that is what they do when you challenge them. If they think that the solution to someone demanding more of you, then that is the reason why things are the way they are. That kind of response is pathetic and childish, but I am not intimidated, though,” a defiant Blake said.

Blake, along with Damion Lowe and other senior members of the squad, have stood up to the JFF administration on issues concerning the team. Prior to this assignment, they demanded the resignation of JFF General Secretary Dalton Wint in June.

The players decided that they would not take the field in a crucial Gold Cup qualifier against Suriname unless Wint, the man they blamed for the foul-up of their travel arrangements, was removed.

Ricketts acceded to the players’ request and they agreed to play. Months later, Wint’s resignation is still not official.

“I have been through a lot and I do not want my children or anyone else to go through what I have gone through, which is why I am making this stand,” said Blake.

“We have so much talent which is going to waste because of lack of leadership and direction. Coaches and players have been changed but the results remain the same and there is a common denominator. So what does that say?,” he argued.

“You cannot run a joke programme and expect players to take it seriously,” explained Blake, who said he has given 100 per cent whenever he is invited to wear his country’s colours.

But, while Blake remains committed to his country, he is prepared to watch from the sidelines.

“If they decide not to select me again, I am fine. They will not use the non-selection to break me,” he challenged.

“They cannot manage. It is at that point now where it is bigger than them. If I did not care, I would just let it slide but I care too much to see us making a mockery of ourselves. People are creeping up on us, some are passing us and we are going backwards,” expressed Blake, the hurt obvious in his voice.

He added that coach Paul Hall suffered as a result of not being retained because he held the leadership of the federation accountable.

Blake, who has twice been named Goalkeeper of the Year in the United States Major League Soccer (MLS), is having one of his best seasons yet, as he leads the league in shutouts (clean sheets), least goals conceded, and his team Philadelphia Union currently sits atop the MLS table.