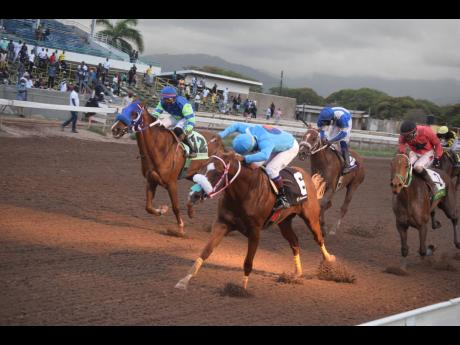 RUNAWAY ALGO is a tempting banker in Sunday’s Bridge 99 FM Cup at seven and a half furlongs after staying on for third behind JORDON REIGN’S and EROY at a mile in grade one on August 27. However, galloping out the mile chute is no blink-sprint, which the speedy chestnut learnt the hard way when I’VE GOT MAGIC denied him a fifth straight win on May 22.

Sharing topweight 126lb with another down-in-class runner, Anthony Nunes’ ONEOFAKIND, RUNAWAY ALGO is back among overnight-allowance runners, the level he beat in May when holding off MAHOGANY by a half-length at five and a half furlongs.

Though he narrowly lost to I’VE GOT MAGIC on his first run among open-allowance horses and ran stakes-rated company close in two races, the last being third behind JORDON REIGN’S a month ago, having not won a race at the higher level allows RUNAWAY ALGO a two-group drop in class with topweight as the penalty.

Returning off a six-month lay-up, ONEOFAKIND has a similar but different story, allowed to slip down two groups after beating CALCULUS in grade one, but with a time stamp of March 19, which earned the five-year-old a get-out-of-jail card granted by way of the condition book.

RUNAWAY ALGO should report the sharper of the two down-in-class runners with natural speed to his advantage. However, to land the Bridge, RUNAWAY ALGO will have to dominate every call, which will be no easy feat with topweight.

To stay the trip, RUNAWAY ALGO will have to be rated, possibly under pressure from runners such as Gary Subratie’s American, AWESOME TREASURE. The latter is a nagging long-speed filly, who could get her claws into RUNAWAY ALGO down the backstretch.

Leading jockey Dane Dawkins is aboard AWESOME TREASURE, who got a blowout with stablemate CALCULUS at nine furlongs and 25 yards a week ago, leading the route race to the half-mile marker.

Tuesday’s winner-off-the-claim, DADDY JONES, is no speedster but his new connections are brimming with confidence after a relatively easy victory at seven and a half in a decent 1:32.3, though the track was running fast.

If there’s a sniper to watch, Richard Azan’s ARTESIA fits the bill. Stretched out past six furlongs for the first time in her last 10 starts, the four-year-old filly ran away from BIG BIG DADDY to clock 1:26.1 at six furlongs a month ago.

Azan has retained Omar Walker, who virtually enjoyed an armchair ride in the restricted overnight allowance. Returning at 115lb, getting 11lb from a possible under-pressure RUNAWAY ALGO, ARTESIA’s sweeping move off the home turn and strong stretch kick is not to be underestimated in what could very well be a collapsing pace.