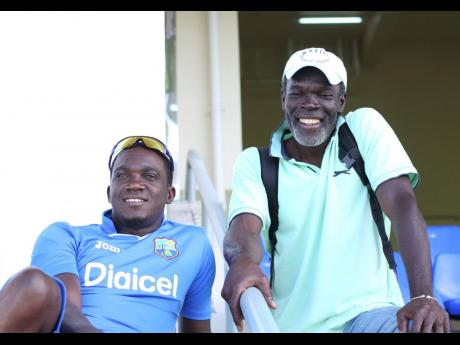 FORMER Leeward Islands and West Indies fast bowler Winston Benjamin believes the use of saliva on the cricket ball is overrated, as it doesn’t really affect the game in the way that many might think it does.

“Where shining of the ball is concerned, bowlers hardly even use saliva these days. It’s more perspiration. Saliva use is very overrated, because it doesn’t really do a whole lot,” Benjamin told The Gleaner yesterday.

The Antigua-born cricketer was speaking in defence of cricket’s governing body, the International Cricket Council (ICC), after they announced that the ban on use of saliva on cricket balls will be upgraded from temporary to permanent.

The ban had first come into effect back in 2019 during the peak of the COVID-19 pandemic. While supporting the stance of banning the use of saliva, Benjamin was quick to point out that the rules of cricket have always been “batsman-friendly”.

“The game of cricket has always been batsman-friendly, from day one. Bat sizes have increased and the pitches are slower. Scoring runs is really what people come to a cricket match to see. Only the diehard cricket fans will know what it takes for a bowler to pick up a wicket. It’s all about hitting sixes and fours, not bowlers getting wickets,” Benjamin added.

Benjamin, 57, who played 21 Test matches, collecting 61 wickets, and 85 One Day Internationals ending with an even 100 scalps, also added that he agrees with the ICC’s decision to have the Mankad rule (bowler running the non-striker out) moved from the ‘unfair play’ section of the rulebook to the ‘run out’ section, thereby legitimising the ‘Mankad’ as a dismissal. It will now be considered a legitimate run out.

“Mankad is not something outside of the rules, even though it’s not something that I would have done. I would warn the non-striker, and let him know that he’s seeking an unfair advantage (by leaving his crease before the ball is bowled). You hear of the term ‘unsportsmanlike’, but there is absolutely nothing wrong with it (Mankad).

“Our very own West Indies Under-19s won a World Cup because one of our players (Keemo Paul) did that. When a bowler is firing a ball at 90mph at a batsman’s head, is that classified as unsportsmanlike? I wouldn’t knock any bowler who does it (the Mankad), because the non-strikers are trying to gain an unfair advantage,” the former West Indies bowler said.