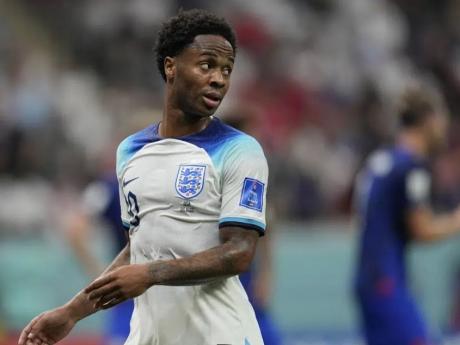 England's Raheem Sterling looks down the field during the World Cup group B football match between England and The United States, at the Al Bayt Stadium in Al Khor, Qatar, Friday, November 25, 2022. (AP Photo/Abbie Parr)

AL KHOR, Qatar (AP) — Raheem Sterling has been ruled out of England's World Cup round of 16 match with Senegal because of a “family matter,” the Football Association said Sunday.

The forward started the Three Lions' opening two games in Group B but was left out of the final match, a 3-0 win against Wales.

The FA didn't provide more details about the reason for Sterling's absence when making the announcement 90 minutes before kickoff against Senegal at Al Bayt Stadium.

“Raheem Sterling is not available for selection for the Three Lions tonight as he is dealing with a family matter,” the FA said on Twitter.

England coach Gareth Southgate told ITV Sport that Sterling is “going to go away and deal with that matter and we'll have to take it from there really.”

Sterling scored in England's opening 6-2 win against Iran, but it was not clear if he would start against Senegal even if available.

The FA announced on Wednesday that England defender Ben White returned home from Qatar because of personal reasons.