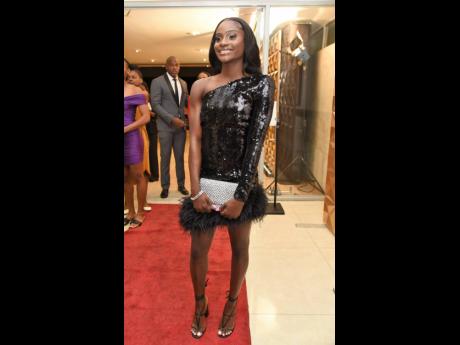 Ian Allen
Kerrica Hill at the RJRGLEANER National Sportsman and Sportswoman of the Year Awards ceremony at The Jamaica Pegasus last Friday.

ENTERING HER first season as a full-fledged professional, world under-20 100m hurdles champion, Kerrica Hill, is hoping to spring a surprise or two, saying she is ready to begin to challenge herself at the elite level.

Hill was honoured on Friday at the RJRGLEANER National Sportsman and Sportswoman Awards, for her accomplishments last year, including that world title-winning run of 12.77 seconds as well as being a part of the 4x100m team that won gold and broke the under-20 record along with Serena Cole, Tia Clayton and world under-20 100m champion, Tina Clayton.

Hill said she has been enjoying the environment so far at Elite, appreciative of a culture that motivates and encourages. While there may have been a surprise to move up the ranks early, Hill said she felt it was just the right time to make the leap.

“I talked to my mom as well as others around me and I felt that it was just the right time,” Hill told The Gleaner.

“I’m adapting well. It’s a new background training schedule. I like the people around me. They have been motivating me. So it has been pretty good.”

Hill, who turns 18 in March, has set the objective of remaining injury free during her first season with Elite.

“The main focus is to stay healthy so I can have a great season and run some surprising times,” Hill said.

Hill, along with World Championship 4x100m silver medallist Kemba Nelson, are among the new additions to the club which has grown over the last two seasons. While she is the youngest of the group, she is relishing the competition and camaraderie which she believes will help to push her.

“It’s a good feeling because I am the youngest. So they are going to encourage me and I am going to (do the best I can),” Hill said.