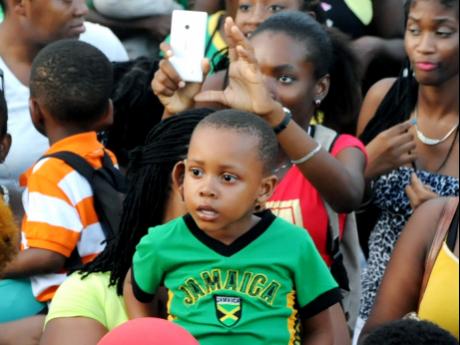 Paul Clarke
This youngster (in green Jamaica shirt) is definitely captivated by the excitement as it unfolded during last Friday’s Black River Day celebrations in St Elizabeth.

The primary stakeholders behind the 2015 staging of Black River Day, which unfolded in the St Elizabeth capital last Friday, are quite elated as the third edition of the event was an overwhelming success.

Black River's mayor, Councillor Everton Fisher, said the event, which was a collaborative effort between the George 'GT' Taylor-led Black River Chamber of Commerce and the St Elizabeth Parish Council, "exceeded expectations by a mile", as it had the historic seaside town buzzing for the entire day.

"This year's event is clearly bigger and better that the previous years," Fisher told The Gleaner at midday as the patrons began to descend on the town in droves. "The businesses have come on board, the citizens have come out in their numbers and the organization has streamlined it to the point where I am left humbled and happy."

Donna Lee Trott, the events manager in the city of Hamilton, in Bermuda, which was twinned to Black River in 2012, was quite enthused by the range of cultural activities which formed the centre-piece of the day's offering.

"It's important to note that, while Bermuda is not strictly located in the Caribbean, we share much Caribbean and African heritage. Black River Day has provided us with a unique opportunity to be a part of that experience," said Trott, who like she did last year, was in Jamaica to share the experience. This time around, she brought along Bermudan rapper Imari, who was a special guest performer at the closing concert.

"Obviously, we share a deep sense of music and entertainment and we are looking now to expand that to the exchange of sports and culture between Hamilton and Black River," added Trott, noting that the twinning of Black River and Hamilton has awesome cultural as well as economic significance.

During the unfolding of the day's activities, four of the town's most prominent citizens were hailed for their exemplary work and presented with special citations for their contribution to the development of the town. The awardees were Ms Gloria Small, Pastor Steve Brown, returning resident Marjorie Monteith, and former politician and attorney-at-law Carl Miller.

While the day's activities attracted scores of Jamaicans from all across the island, who revelled in the offerings of the booths displaying cultural memorabilia, food and craft items, among other things, the limited presence of visitors to the island was quite conspicuous, especially to Black River mayor, Councillor Everton Fisher.

According to Fisher, while the large turnout was indeed a sign of the growth of the three-year-old event he said he would have liked to see some more 'real tourists' passing through. With that in mind, he has indicated a willingness to have the Tourism Enhancement Fund (TEF) adopt Black River Day going forward.

"The parish council, of which I am chairman; and the Chamber of Commerce, the Black River chapter, are really pushing this one-of-a-kind project and we are pleased so far with the outcome," said Fisher. ""However, I would like plenty more people from overseas to be a part of this celebration. What we are envisioning is for Black River Day to become a major event on the local market, for both locals and visitors to the country."

In terms of revenue generation, Taylor said the Black River Chamber of Commerce was quite optimistic that, based on the overwhelming support this year, they should be able to declare a profit.

"Early reports suggest that it was excellent for businesses. Vendors really had a good day and the people enjoyed it immensely. So I would say it was a great success," said Taylor. "We want this event to be the catalyst for the growth we want to see in Black River going forward."

When the event concluded with its usual star-studded reggae concert, which featured acts such as Anthony Cruz, Professor Nuts, Khago and Little Hero, the happiness on the faces of the patrons left no doubt that they had a great day.