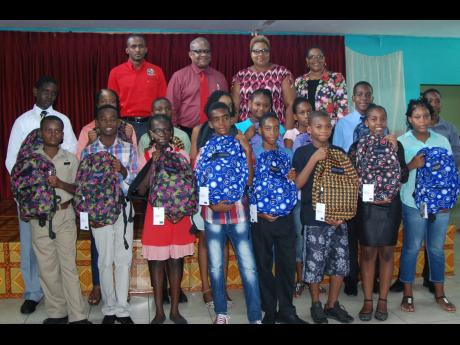 Contributed
The 16 students who received grants and educational gifts from Lloyd B. Smith, the Member of Parliament for St. James Central, for ther exploits in the 2015 Grade Six Acheivement Test (GSAT) pose with their bags laden with gifts, which they received at a luncheon at the International University of the Caribbean, in Montego Bay. Posing with the students in the back row, from left to right are: Aubrey Stewart, Chief Executive Officer and Founder of Youth Organization for Upliftment, who was the Guest Speaker, MP Lloyd B. Smith, Suzette Brown, Councillor for Montego Bay South Division and Emcee, Marline Stephenson- Dalley.

IN A gesture aimed at rewarding success, Lloyd B. Smith, member of parliament for Central St James, last week presented 16 students from his constituency with more than $500,000 in scholarship funds for their outstanding performances in the 2015 Grade Six Achievement Test (GSAT).

In speaking to the parents of the successful students, Smith urged them to exercise as much vigilance as possible to ensure that the children don't fall prey to dangerous men.

Guest speaker Aubrey Stewart, chief executive officer and founder of Youth Organisation for Upliftment, urged the awardees to visualise their dreams and be unwavering in their pursuit of achieving their goals.

Recounting his days growing up in the volatile community of Albion Lane in Montego Bay and the challenges his mother faced, Stewart, who had the distinction of introducing United States President Barack Obama at the town hall meeting at the University of the West Indies earlier this year, said life was not a bed of roses for him.

"My mother broke down in tears because she didn't know where the money was going to come from to buy books ... . We rented the books, and I got the worst set," recalled Stewart, who was a successful GSAT candidate in 2006. "We had no money to buy uniform, so I decided I would wear the same khaki I wore at Barracks Road Primary and sew on the epaulettes."

Stewart, who recalled a 2007 incident in which thugs shot up and firebombed his home, resulting in his grandmother suffering bullet wounds, said it was incidents like those that caused him to put more value on getting a good education.

"After God spared my life, I decided to use my life as a testimony. I had to dedicate my spirit and my body to serve," said Stewart, who once served as Montego Bay's junior mayor. "When you hear my profile, don't think that everything happened in one day ... . I went through the worst challenges and circumstances ... . My mission is to make a change to inspire lives and to, ultimately, make the difference."