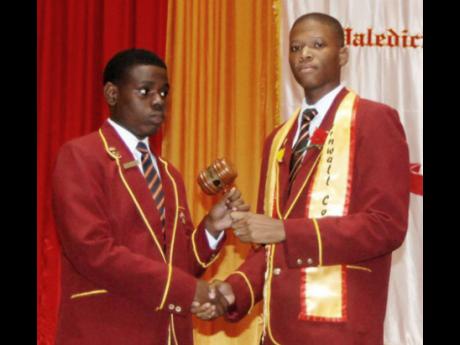 Exciting times are looming on the horizon for Cornwall College, which earlier this year created history by having girls among its graduates for the first time since coming into existence in 1896.

Come the week of September 13-19, the school will be rolling out a raft of activities to mark its much-anticipated 2015 Homecoming, which is an integral part of the school's 119th anniversary celebrations.

"For the past seven years, The Cornwall College (CC) Old Boys Association has been spearheading this annual event to give alumni an opportunity to contribute towards the development and improvement of the school's physical plant, as well as to assist with the educational development and training of the students," said Paul Trench, an executive member of the school's past student association.

"The homecoming activities will cover a wide range of activities for old boys, friends and well-wishers, both on and off campus," continued Trench. "The activities will commence with a church service at the newly built school's chapel on Sunday, September 13, starting at 10 a.m. "

Following the church service on Sunday, both the school's local and international old boys' chapters will be at the school on Monday, where they will participate in the school's morning devotion, using that forum to make known their plans for projects they will be undertaking for the current school year.

"Following the morning devotion, the sixth form students will be presented with a study pavilion/gazebo at the official opening ceremony, which is slated for 2 p.m.," noted Trench.

On Tuesday, at 11, the past students will spearhead the hosting of the Carlton Chin Track and Field Festival for Class Three and Four athletes. The meet has as its main objective the unearthing of raw, new talent, to unleash on the annual ISSA Boys' and Girls' Championship.

The school's daCosta Cup team, which will be seeking their 13th hold on the coveted title, will roll into the celebrations Wednesday when they match skills with Irwin High School, which they have had a history of doing well against. Following the game, Smokeez by the Sea will host a post game Link up jersey party at Ironshore.

On Thursday, the school will host an open house where the school's clubs and societies will showcase the work of students. In the afternoon - there will be a meet and greet at The Club in Reading Heights.

"The weekend activities will feature Mentorship Day on Friday, September 18, when the old boys will take over the classrooms for the morning session, motivating and encouraging the students in their academic and developmental pursuits," said Trench. "The annual CC Trust Limited's general meeting will convene thereafter when decisions are expected to be taken to guide the trust operations for the current school year.:

The week of activities will culminate with the flagship event, the Men of Might Awards Dinner and Dance at the Half Moon Hotel on Saturday, September 19, starting at 7:30 p.m.

"Outstanding Cornwallians will be awarded for their positive contribution and service at home and abroad in various fields. There will be four special awards to be handed out in the form of three Men of Might Honour Awards and one Men of Might Hall of Fame Award," said Trench.

"The awardees have made a positive impact on the lives of many persons locally and internationally in various fields, including science, technology, medicine, agriculture, politics, social work, business, education, leadership, law, sports, and many other respected areas."