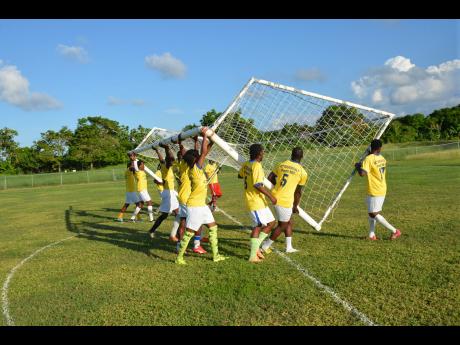 Claudia Gardner
Members of the Lucea United Football Club move a goalpost from the centre of a football field to the goal line during a training session.

The gnawing gun-violence problem in Hanover has resulted in the Hanover Football Association reducing the number of match venues, for the playing of games in this season's Hanover Major Football League, to just two.

President of the Hanover Football Association Sheridan Samuels said the decision was taken in a bid to protect the well-being of players from the 11 teams which are to compete. Many of the shootings have been taking place in some sections of Lucea, where several of the football teams are headquartered.

Among the latest shootings in the Lucea area was an incident two weekends ago, where one man was shot and killed and three persons, including a woman, a 12-year-old, and a 13-year-old, left nursing gunshot wounds, after gunmen struck in the Bigwell Lane community, Samuels' hometown.

"What we have done is to look at the entire competition and we have decided on using two venues. We used to have about four fields that we use. But be recognised the problem from last season, so we have been trying to regularise the whole thing by ensuring that we don't have the teams going too deep into rural Hanover," Samuels explained.

"So what we have done is to narrow it down to only two fields, Watson Taylor Park - and, we having some issues getting Orchard playfield, so we are looking at Bethel Primary and Junior High," Samuels, who is also the mayor of Lucea, said.

He added: "Another measure that we are taking is to ensure that the teams abide by the stipulated start time of the games. So we start exactly 3:30 so that everyone, including the players, can reach home before nightfall. Normally, you say the game begins at 3:30 and you find teams coming all 4 pm. and then by the time the game finish and they change their clothes to go home, then it is night. So we are going to stick to that rule and start the matches at 3:30."

In January, some members of the football fraternity in Hanover, expressed concern that gun crimes in sections of the parish, was threatening to derail domestic competitions, including the major League. They had lamented that players, particularly those from teams within the Lucea area were not attending training, or only a handful would show up for practice, as they feared for their safety.

One footballer had said the fear stems from the fact that some of the killings have been exacted on persons who are in no way involved in conflicts, and are only distant relatives or friends of persons who are enemies of the shooters. Another footballer confirmed that his colleagues were unwilling to venture too far from their homes to Lucea and its outlying communities, where much of the violence has been occurring.

Samuels predicted that this season, teams will see a drastic reduction in spectator support at matches as a result of the venue changes and the fear of violence.

"In terms of support, you have some ardent football supporters who are going to come out, but I think the numbers are going to be reduced by about 30 to 40 per cent in the western side of Hanover, because that is where we have the major crime problem. But in Eastern Hanover, they still have the momentum up there and the supporters will come out for the games there. They are not affected," he said.

"We are liasing with the police to ensure that we have at least two police officers at the venues whenever we have games," he added.