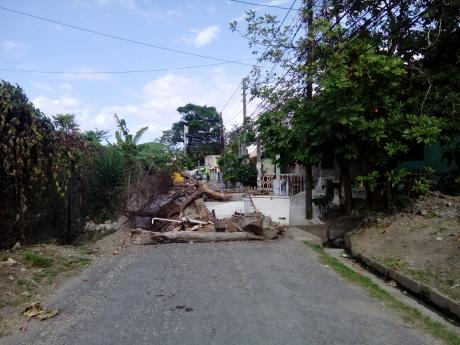 Claudia Gardner
The blocked section of Bigwell Lane in Lucea.

Resident of the Bigwell community in Lucea, Hanover, are calling on the National Works Agency (NWA) to visit the area to discuss solutions and alternatives to the use of the roadway there as a main thoroughfare.

One resident, Nicodie Haughton, told Western Focus that the residents had resorted to blocking off one of the entrances to the lane, due to a recent drive-by shooting which left one man dead and three persons injured, as well as the noise and dust nuisances being caused by motor vehicles passing through.

"If you are going to have traffic coming through the community so often, you have to look at it on a bigger scale - that kids don't really understand certain things, where they are going to look up and down, especially when dem a play," Haughton said.

"This is the kids' playground. They must come and meet with the community and hear the views of the people," he said.

The NWA had converted all major thoroughfares in the Lucea town centre, several years ago, to one-way roads, resulting in a dramatic increase in traffic through Bigwell, which motorists began to use as a convenient shortcut.

Another resident and father of two, Kemar Cotterell, said he is being highly inconvenienced and is fearful about the safety of his children as vehicles often speed through the lane without care for pedestrians.

"I was concerned even before the shootings. Because, even after coming from work and trying to get some sleep you can't, because there are bikes, trucks, cars coming through and causing all kinds of disturbance," Cotterell said.

"My suggestion is that we get a piece of iron with a chain so the road can open like, say, from 6 a.m. to 6 p.m. Then close back at night. It is very annoying at times. The horns at the main road doesn't really disturb you but here, the houses are practically in the road. Only several feet of space separate the houses from the road," he continued.

Added Cotterell: "From the lane has been blocked, it's the best opportunity we have had to relax; we don't get disturbed by anyone. Everybody has different views, so they (NWA) need to do a community walk and then arrange for a meeting with the community."