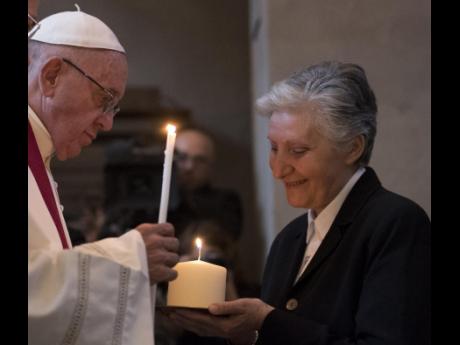 AP
Pope Francis (left) lights a candle in the Basilica of St Bartholomew in Rome yesterday as he celebrates the Liturgy of the Word in memory of the martyrs of the 20th and 21st centuries.

Pope Francis yesterday comforted the sister of an elderly French priest who was slain by Islamic militants in a church in Normandy as the pontiff paid tribute with a special prayer service to the courage of 20th- and 21st-century Christian martyrs.

Francis gripped the hands of Roselyne Hamel, whose brother, the Reverend Jacques Hamel, 85, died when his throat was slit as he celebrated Mass on July 26, 2016.

He quietly spoke with her during the evening service in St Bartholomew Basilica on Tiberina Island in Rome. He had just heard her tell fellow faithful in the church that her brother was killed by "two youths radicalised by a discourse of hate."

Francis said the legacy of modern-day martyrs "teaches us that with the strength of love, meekness, one can combat arrogance, violence, war, and with patience, achieve peace".

Next week, Francis makes a two-trip pilgrimage to Egypt, a predominantly Muslim Arab nation, where, on April 9, on the Christian holy day of Palm Sunday, twin suicide bombings of Coptic churches killed 44 people.

In yesterday's service, Francis prayed that "persecuted Christians are protected and that peace soon comes to the world".

Departing from his prepared homily, Francis recounted how he was touched when, last year, during a visit to a migrant detention facility in Lesbos, Greece, a Muslim father of three told him that his Christian wife had her throat slit when "terrorists came ... and asked what our religion was".

Francis said the widower told him his wife was killed in front of him when she refused to toss away the cross she was wearing.

In his homily, Francis also hailed the suffering of refugees, who are kept in detention facilities, lamenting that "international accords seem more important than human rights".

He praised Italians and Greeks for welcoming tens of thousands of refugees and migrants rescued at sea and said he hopes the same generous spirit will "infect" other countries in Europe that have been resistant to taking in the refugees.