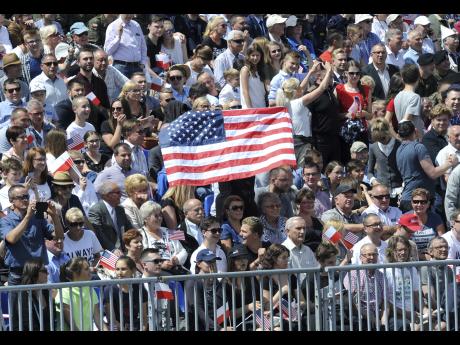 AP
Poles hold a Unites States flag while waiting for US President Donald Trump to deliver a speech in Krasinski Square, in Warsaw, Poland, yesterday.

Donald Trump was welcomed Thursday by an enthusiastic crowd in Warsaw that chanted his name and waved US and Polish flags when he delivered an address just as Poland's government had promised.

Poland's conservative government had reportedly promised the US president enthusiastic crowds in its formal invitation and it clearly delivered. People chanted "Donald Trump! Donald Trump!" before and after a speech in which the US leader honoured Poland's traditional patriotic values and sacrifices for freedom during World War II.

Many in the crowd, which Warsaw police estimated at 15,000, said they had come from distant cities and towns in buses organised by the country's populist ruling Law and Justice party.

"We are here from our own convictions and belief," said Stanislaw Niesyn, who travelled from the city of Bydgoszcz, 270 kilometres (165 miles) away.

In Poland, many people hold Trump in genuine admiration for the way he seeks to preserve national traditions and close off borders out of fear of Islamic extremism.

One Polish-American in the crowd, Lukasz Mellerowicz, 67, said he was a Trump supporter above all because he opposes abortion.

Trump himself has shifted stances on abortion. He was once avidly in favour of abortion rights but has since declared himself against abortion, although he did not make abortion rights a centrepiece of his presidential campaign.

Many in the crowd were supporters of Poland's ruling nationalist party, which is often at odds with its European Union allies due to the party's strong anti-migrant policies and steps that have weakened Poland's system of checks and balances.