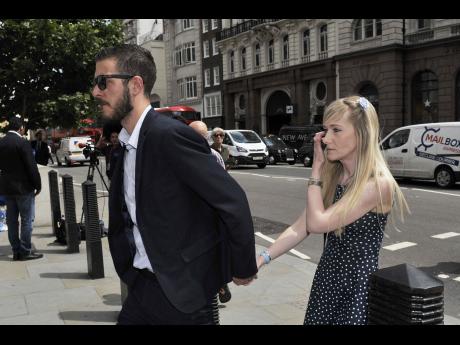 AP
The parents of sick child Charlie Gard, Connie Yates and Chris Gard as they arrive at the High Court in London for a hearing in their latest bid to see him treated with an experimental therapy, in London yesterday.

A British court yesterday gave the parents of 11-month-old Charlie Gard a chance to present fresh evidence that their terminally ill son should receive experimental treatment.

Judge Nicholas Francis gave the couple until tomorrow afternoon to present the evidence and set a new hearing for Thursday.

The decision came after an emotionally charged hearing in which Gard's mother wept in frustration and his father yelled at a lawyer.

The reopening of the case at London's High Court may allow Charlie to receive the therapy treatment at his current hospital or abroad.

Great Ormond Street Hospital, which had intended to turn off the baby's life-support systems, applied for the court hearing because of "new evidence relating to potential treatment for his condition".

The evidence came from researchers at the Vatican's children's hospital and another facility outside of Britain.

The application came after both Pope Francis and President Donald Trump fuelled international attention to the case, with hospitals in Rome and the US offering to provide Charlie the experimental therapy.

Previous court rulings have said that Charlie couldn't receive the treatment for his mitochondrial depletion syndrome, a rare genetic disease that left him with brain damage and unable to breathe unaided, and that he should be taken off of life support.

British and European courts sided with the hospital's original stance that the experimental treatment was "unjustified" and might cause Charlie more suffering with no cure.