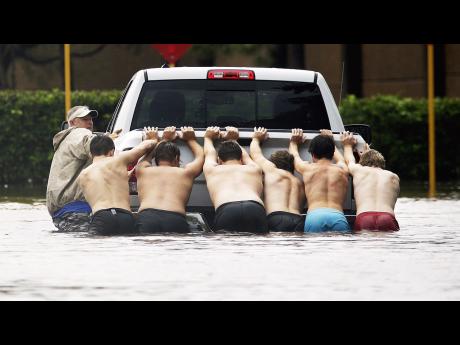 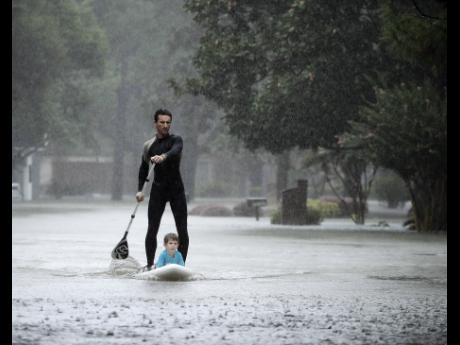 Floodwaters reached the roof lines of single-storey homes yesterday, and people could be heard pleading for help from inside as Harvey poured rain on the Houston area for a fourth consecutive day after a chaotic weekend of rising water and rescues.

The nation's fourth-largest city was still largely paralysed by one of the largest downpours in US history. And there was no relief in sight from the storm that spun into Texas as a Category 4 hurricane then parked itself over the Gulf Coast. With nearly two more feet of rain expected, authorities worried whether the worst was yet to come.

Harvey has been blamed for at least two confirmed deaths. A Houston television station reported yesterday that six family members were believed to have drowned when their van was swept away by floodwaters.

The KHOU report was attributed to three family members the station did not identify. No bodies have been recovered.

Police Chief Art Acevedo told The Associated Press that he had no information about the report but said that he's "really worried about how many bodies we're going to find".

According to the station, four children and their grandparents were feared dead after the van hit high water on Sunday when crossing a bridge in the Greens Bayou area.

The driver of the vehicle, the children's great-uncle, reportedly escaped before the van sank by grabbing a tree limb. He told the children to try to escape through the back door, but they were unable to get out.

The disaster unfolded on an epic scale in one of America's most sprawling metropolitan centres. The Houston metro area covers about 10,000 square miles, an area slightly bigger than New Jersey. It's crisscrossed by about 1,700 miles of channels, creeks, and bayous that drain into the Gulf of Mexico, about 50 miles to the southeast from downtown.

The flooding in Houston was so widespread that the levels of city waterways have either equalled or surpassed those of Tropical Storm Allison from 2001, and no major highway has been spared some overflow.

The city's normally bustling business district was virtually deserted yesterday, with emergency vehicles making up most of the traffic. Most traffic signals were out and most businesses closed.

Elsewhere, water gushed from two reservoirs overwhelmed by Harvey as officials sought to release pressure on a pair of dams where floodwaters were at risk of spilling around the sides of the barriers. The move aimed at protecting the downtown business district risked flooding thousands more homes.