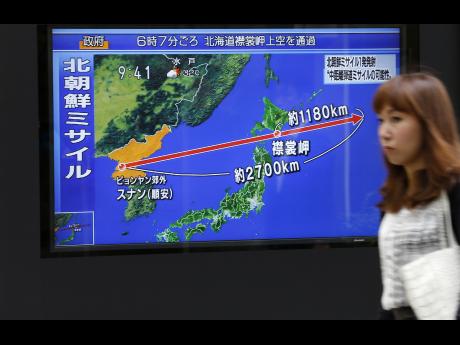 In a first, North Korea yesterday fired a ballistic missile designed to carry a nuclear payload that flew over Japan and splashed into the northern Pacific Ocean, officials said. The aggressive missile launch likely the longest ever from North Korea over the territory of a close US ally sends a clear message of defiance as Washington and Seoul conduct war games nearby.

In a statement, US President Donald Trump said North Korea had signalled its "contempt for its neighbours" and that "all options are on the table" in terms of a US response.

South Korea's Joint Chiefs of Staff said the missile travelled around 2,700 kilometres (1,677 miles) and reached a maximum height of 550 kilometres (341 miles) as it flew over the northern Japanese island of Hokkaido. The distance and type of missile tested seemed designed to show that North Korea can back up a threat to target the US territory of Guam, if it chooses to do so, while also establishing a potentially dangerous precedent that could see future missiles flying over Japan.

Any new test worries Washington and its allies because it presumably puts North Korea a step closer to its goal of an arsenal of nuclear missiles that can reliably target the United States. Yesterday's test, however, looks especially aggressive to Washington, Seoul and Tokyo.

Japanese officials made their usual strongly worded condemnations of the launch.

"We will do our utmost to protect people's lives," Japanese Prime Minister Shinzo Abe said. "This reckless act of launching a missile that flies over our country is an unprecedented, serious and important threat."

The launch was also condemned by UN Secretary-General Antonio Guterres Britain, France, Germany, Russia, and a number of other countries.