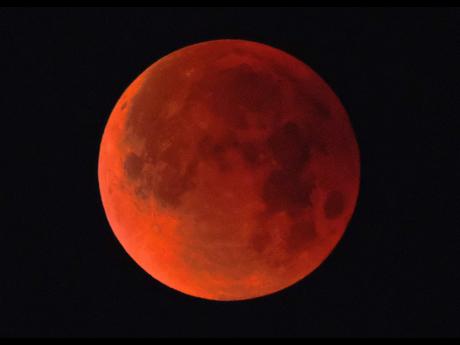 It's the first time in 35 years a blue moon has synced up with a supermoon and a total lunar eclipse, or blood moon because of its red hue.

Hawaii and Alaska had the best seats, along with the Canadian Yukon, Australia, and Asia. The western US also had good viewing, along with Russia.

At the Griffith Observatory in Los Angeles, hundreds gathered on the lawn in the wee hours under clear skies. Traffic was backed up more than a mile around the observatory. Sky-gazers also lined the beach near the Santa Monica Pier, some snapping photos and others reclining in the sand, their faces turned upward.

John Cook joined fellow photography enthusiasts at the pier, using the ferris wheel and roller coaster for his foreground.

Photographers also gathered at the Telegraph Hill neighbourhood of San Francisco, striving to get the famous Coit Tower in their moon shots.

In San Francisco's Marina district, a crowd gathered to watch the super blue blood moon, as NASA calls it, set over the Golden Gate Bridge. Spectators got lucky: There were clear skies and no trace of the city's famous fog.

On the other side of the Pacific, where it was already nightfall, hundreds descended on the Tokyo Garden Terrace Kioicho complex, where telescopes and binoculars were plentiful. A TV monitor showed zoom-in views of the moon, and a university professor gave a rundown as the eclipse unfolded.