Off to Europe: Trump to meet worried NATO heads, then Putin 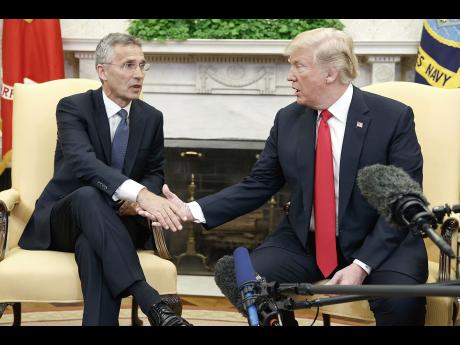 Evan Vucci
In this May 17, 2018, file photo, President Donald Trump meets with NATO Secretary General Jens Stoltenberg in the Oval Office of the White House in Washington.

With the established global order on shaky footing, President Donald Trump's weeklong trip to Europe will test already-strained bonds with some of the United States' closest allies, then put him face to face with the leader of the country whose electoral interference was meant to help put him in office.

Trump departs Tuesday on a four-nation tour amid simmering disputes over trade and military spending with fellow Western democracies and speculation about whether he will rebuke or embrace Russian President Vladimir Putin.

He meets the Russian leader in Helsinki as the finale of a trip with earlier stops in Belgium, England and Scotland.

Trump has shown little regard for America's traditional bonds with the Old World, publicly upbraiding world leaders at NATO's new headquarters a year ago for not spending enough on defence, and delivering searing indictments of Western trading partners last month at an international summit in Canada. On this trip, after meeting with NATO leaders in Brussels, he'll travel to the United Kingdom, where widespread protests are expected, before he heads to one of his Scottish golf resorts for the weekend.

In the run-up to his trip, the president did little to ease European concerns by delivering fresh broadsides against NATO, an intergovernmental military alliance of 29 North American and European countries aimed at countering possible Russian aggression.

"I'll tell NATO: 'You've got to start paying your bills,'" Trump pledged at a rally last week in Montana in which he bemoaned that Americans were "the schmucks that are paying for the whole thing".

He then laced into German Chancellor Angela Merkel, who will be in attendance in Brussels, complaining about how much the United States put towards Germany's defence:

"And I said, you know, Angela, I can't guarantee it, but we're protecting you, and it means a lot more to you. ... I don't know how much protection we get from protecting you."

At the same time, he declared that "Putin is fine" and that he had been preparing for their summit "all my life".