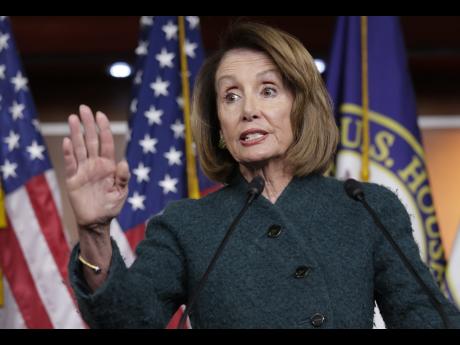 Shutdown pressure on President Donald Trump mounted Wednesday as House Speaker Nancy Pelosi called on him to delay his State of the Union address, and his own economists acknowledged that the prolonged stand-off was having a greater economic drag than previously thought.

In a letter to Trump, Pelosi cited security concerns, noting that both the Secret Service and the Homeland Security Department are entangled in the partial government shutdown, now in its fourth week. She added that unless the government reopens this week, they should find another date it's now January 29 or Trump should deliver the address in writing.

The White House did not immediately respond to the high-stakes move on the 26th day of the shutdown, as Trump and Democrats are at an impasse over Trump's demands for $5.7 billion to build a wall along the Mexican border.

Pelosi is refusing money for the wall she views as ineffective and immoral; Democrats say they will discuss border security once the government has reopened.

"I am running out of ideas," said Senator Lindsay Graham, a South Carolina Republican who has been working on bipartisan strategies to resolve the shutdown.

"The Democrats are not going to negotiate with the government shut down," he said. "People in the White House don't like hearing that. I don't know what to tell them other than what I actually think. If you've got a better idea ... count me in."

Graham and Democratic Senator Chris Coons of Delaware were organising a bipartisan letter asking Trump to agree to the idea of reopening the government for three weeks to allow time for negotiations on border security. Trump rejected that approach earlier.

The letter, a copy of which was obtained by The Associated Press, states that the senators will make their best efforts to have "Congress develop and vote on a bipartisan agreement that addresses your request" for border money if he agrees to support legislation reopening the government for those weeks.