Life sentence for accomplice in attack that killed 148 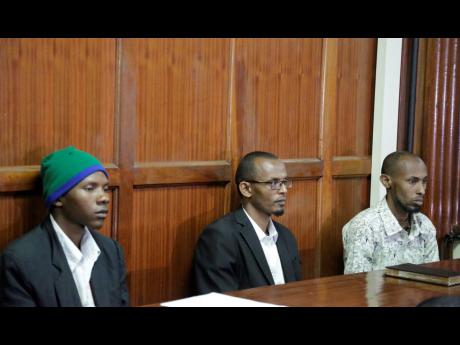 The Associated Press
From left: Defendants Rashid Charles Mberesero, Hassan Aden Hassan and Mohamed Abdi Abikar sit in the dock to hear their verdict at a court in Nairobi, Kenya, yesterday.

A Kenyan court on Wednesday sentenced one man to life in jail and two others to 41 years each for being accomplices to the 2015 Garissa University attack in which 148 people were killed.

Phone records and handwriting linked the three to the attack in eastern Kenya which killed mostly university students.

The three were also found to be members of the al-Shabab Islamic extremist group based in neighbouring Somalia, which claimed responsibility for the attack. Al-Shabab has carried out numerous attacks inside Kenya since 2011 as retribution for Kenya sending troops into Somalia to counter the al-Qaida-linked fighters.

Rashid Charles Mberesero, who represented himself in court, was sentenced to life in jail while Mohamed Abdi Abikar and Hassan Aden Hassan were each sentenced to 41 years in prison after being convicted last month of assisting the attack

Prosecutor Duncan Ondimu had asked the court for a 60-year sentence for each. “Sixty years will serve justice. Though it won’t bring back the lives lost, it will go a long way to pass a message that such actions will not go unpunished,” he said.

They were not first-degree offenders of the evil of the university attack, said defence lawyer Mbugua Mureithi, who represented the two men who received 41-year sentences. “These men were not at Garissa University at the fateful day,” he said, adding that the men “never pulled the actual triggers of the actual guns” fired at the university.

In the Garissa University attack in April 2015, four gunmen forced their way on to the campus and opened fire on students and staff. All four gunmen were killed. The attack was the deadliest attack on Kenyan soil by al-Shabab, an affiliate of al-Qaida. Al-Qaida carried out Kenya’s deadliest attack when it bombed the US Embassy building in Nairobi in August 1998, killing more than 200 people. The US Embassy in Dar es Salaam was targeted by the group on the same day in a near-simultaneous attack.