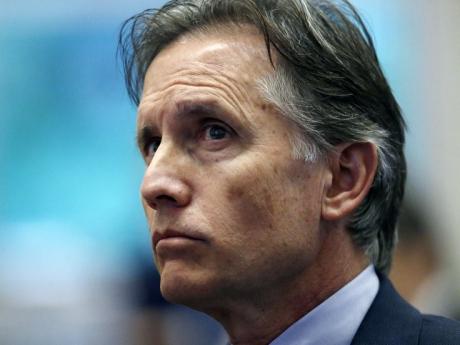 In this May 29, 2019 file photo, Oklahoma Attorney General Mike Hunter watches a video deposition in Norman, Okla., during Oklahoma's trial against drugmakers blamed for contributing to the opioid crisis. (AP Photo/Sue Ogrocki, File)

NORMAN, Okla. (AP) — So far, Oklahoma Attorney General Mike Hunter has secured about $355 million from two groups of defendant drugmakers in the state’s lawsuit against opioid manufacturers, and he’s trying to make the case that even more money should come Oklahoma’s way in the first such state case to go to trial.

While Hunter presses the claim that Johnson & Johnson is to blame for Oklahoma’s opioid epidemic, he’s also facing criticism, some from his own Republican colleagues, about his team’s deal-making and go-it-alone style.

Because Oklahoma’s is the first case to proceed to trial, the litigation and the state’s earlier settlements with Oxycontin-maker Purdue Pharma and Israeli-owned Teva Pharmaceuticals are being closely watched, especially with roughly 1,500 similar lawsuits filed by state, local and tribal governments consolidated before a federal judge in Ohio.

The New Brunswick, New Jersey-based consumer products giant and its subsidiaries, including Janssen Pharmaceuticals, argue that they participated in a lawful and strictly regulated industry and that their marketed products represent only a tiny fraction of the opioids used in Oklahoma.

Johnson & Johnson says that much of the nation’s opioid crisis is the result of illegal activity, such as drugs being stolen or fraudulently obtained.

Oklahoma claims the companies are responsible for fuelling the state’s opioid crisis by using an aggressive and misleading marketing campaign that overstated the effectiveness of opioids for treating a broad range of pain while downplaying addiction risks.

Citing Johnson & Johnson subsidiaries that produced the raw materials used to produce the drugs, Hunter last week characterised the defendants as the “kingpin” of an epidemic that has created a generation of addicts and killed nearly 7,000 Oklahoma residents.

The state has proposed a $17.5 billion abatement plan to abate the problem over the next 30 years.