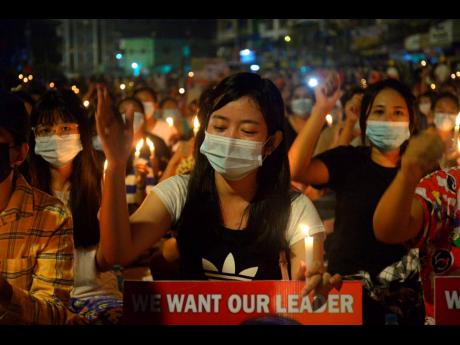 Four deaths were reported in Mandalay, the country’s second-biggest city, two in Pyay, a town in south-central Myanmar, and one in Twante, a suburb of Yangon, Myanmar’s largest city. Details of all seven deaths were posted on multiple social media accounts, some accompanied by photos of the victims.

The actual death toll is likely to be higher, as police apparently seized some bodies, and some of the victims suffered grievous gunshot wounds that doctors and nurses working at makeshift clinics will be hard-pressed to treat. Many hospitals are occupied by security forces, and as a result are boycotted by medical personnel and shunned by protesters.

Other unofficial but carefully compiled tallies put the total number of deaths since the coup at around 90.

Saturday’s killings did not faze demonstrators in Yangon, who crowded a downtown commercial area past the official 8 p.m. curfew to hold a mass candlelight vigil and to sing about their cause. The mostly young protesters rallied at an intersection where they usually gather for daytime protests.

After-dark rallies were also held in Mandalay and elsewhere.

Reports on social media also said three people were shot dead Friday night in Yangon, where residents for the past week have been defying the curfew to come out onto the streets.

A coup last month reversed years of slow progress toward democracy in Myanmar, which for five decades had languished under strict military rule that led to international isolation and sanctions.

Suu Kyi’s National League for Democracy party led a return to civilian rule with a landslide election victory in 2015, and an even greater margin of votes last year. It would have been installed for a second five-year term last month, but instead Suu Kyi and President Win Myint and other members of the government were placed in military detention.