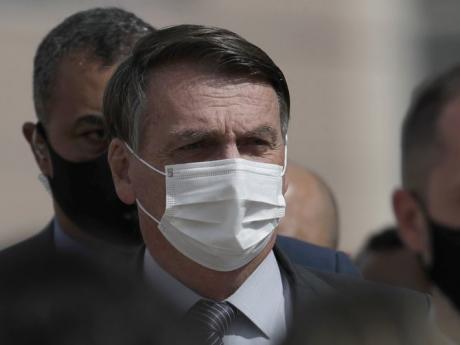 Wearing a mask to curb the spread of the new coronavirus, Brazil's President Jair Bolsonaro arrives for a ceremony to deliver affordable homes built by the government in a neighbourhood of Brasilia, Brazil, Monday, April 5, 2021. (AP Photo/Eraldo Peres)

SAO PAULO (AP) — Brazil’s Supreme Court has allowed a Senate investigation of President Jair Bolsonaro’s handling of the pandemic to go forward, one of two cases it tackled that could affect the leader’s bid for reelection next year.

One of the judges earlier ruled he had been unjustly convicted in a corruption case, a decision that effectively reinstated his right to run for the presidency again.

The court voted 10-1 Wednesday to uphold Justice Luís Roberto Barroso’s order that the Senate should start an investigation into Bolsonaro’s management of the crisis because a required number of senators had sponsored such a call.

The Senate president had tried to delay the probe, citing pandemic health restrictions.

Critics, including those calling for or leading the investigation, say Bolsonaro has bungled Brazil’s response to the pandemic by resisting health-driven restrictions on activity, failing to marshal resources for vaccines and stimulating the use of drugs that don’t work against the virus.

Bolsonaro and his allies say he’s being unfairly blamed for Brazil’s surge in COVID-19 deaths, a toll that trails only that of the United States. Brazil’s seven-day average death toll hit a new record on Monday.

The Senate probe “is an attempted political coup against the president,” said Senator Márcio Bittar, a Bolsonaro ally, in a Twitter post on Wednesday.

He’s also cried foul as the Supreme Court has issued rulings that go against him, prompting outrage from his conservative base that claims the court is overstepping constitutional bounds.

“The desperation with the pandemic tends to increase as deaths continue to grow. Economic issues are also far from being solved. And at the same time his administration is fighting with its base in congress over next year’s budget,” Melo said.

“The surroundings of the inquiry don’t favour Bolsonaro.”

The top court last year knocked down Bolsonaro’s attempt to overturn local restrictions meant to slow the advance of COVID-19, ruling that governors and mayors are free to determine their own COVID-19 protocols.

The Brazilian leader, who has long downplayed the risks of the disease and still denounces lockdowns, has argued lawmakers should also investigate the actions of governors and mayors to whom the federal government provided funds.

He and his allies scored a partial win at the Senate on Tuesday when the use of such funds was made part of the investigation.

Bolsonaro on Wednesday complained that Justice Barroso’s April 8 ruling that the Senate probe should go forward had created “an atmosphere of animosity.”

“That justice is interfering with the Senate in order to go after me,” he said.

More than the required 27 senators had signed a request for the investigation, but the president of the Senate, Rodrigo Pacheco, had refrained from greenlighting the probe, citing health concerns amid the pandemic.

The court on Wednesday also began assessing the decision by Justice Luiz Edson Fachin on March 8 to annul da Silva’s two corruption convictions, which were related to the massive “Car Wash” scandal focused on the state oil company.

The hearing will continue Thursday after the justices agreed by 9 votes to 2 that the case should indeed be heard in a full court session.

Early polling for the 2022 election shows the 75-year-old leftist, who governed Brazil between 2003 and 2010, neck-and-neck with Bolsonaro.

Da Silva was leading polls in 2018 when he was knocked out of the race by a conviction involving a beachfront apartment that prosecutors alleged — and he denied — belonged to him.

One of the top court’s two panels of justices already ruled Moro was biased against da Silva.