WHO: Omicron could spread faster but it’s still not certain 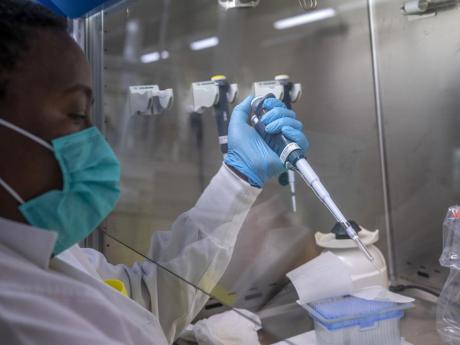 Puseletso Lesofi prepares to sequence COVID-19 omicron samples at the Ndlovu Research Center in Elandsdoorn, South Africa on Wednesday, December 8, 2021. The centre is part of the Network for Genomic Surveillance in South Africa, which discovered the omicron variant. (AP Photo/Jerome Delay)

GENEVA (AP) — The World Health Organization says early evidence suggests the omicron variant may be spreading faster than the highly transmissible delta variant but brings with it less severe coronavirus disease -– though it's too early to make firm conclusions.

The comments come among swirling concerns about the new variant that first emerged in southern Africa last month, prompting some countries to shut their borders and rattling stock markets fearful of the long-term impact of a possible new variant of the virus that has already infected at least 267 million people and killed more than 5.2 million.

Maria Van Kerkhove, the technical lead for COVID-19 at the UN health agency, cautioned that it was too early to determine the severity of disease caused by omicron, saying there's only “anecdotal information” about that for now.

“We certainly have information from South Africa that many of the patients that are identified with omicron have a more mild course of the disease,” she said.

“But it does take time for people to go through the full course of their infection.”

Meanwhile, WHO officials stuck to their stance that giving booster shots to people who are already vaccinated should be a secondary priority to getting first doses into the arms of people in places that have relatively little vaccination coverage.

Dr Soumya Swaminathan, the WHO's chief scientist, said “wholesale boosting is not the solution right now.”

That appeared to be an allusion to policies in some countries, notably in hard-hit Europe and the United States, that encourage broad categories of people to get booster shots, not just groups that are seen as especially vulnerable.

“I think the message is loud and clear that it's a primary course of vaccination that is going to protect against severe disease and death -- that has to be our goal.”

Boosters, she added, aren't useful in countries with large vaccine supplies but where up to 50% of people have not gotten vaccinated, whether out of concern for secondary effects or other reasons.

“At this point, the benefits that we will get from reaching those people who have not received primary courses of vaccination are going to be higher than giving additional doses to those who have already completed a primary course,” Swaminathan said.

The agency had hoped to vaccinate priority populations — the elderly, people with weaker immune systems and health care workers -– in all countries by the end of this year.

But rich countries with big vaccine stockpiles have monopolised most doses.