Crisis in Ukraine a showdown of two world views 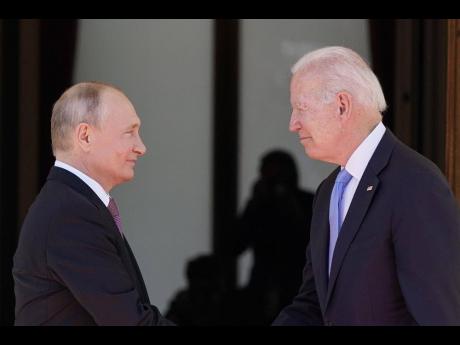 File
US President Joe Biden (right) and Russian President Vladimir Putin, arrive to meet at the ‘Villa la Grange’, on June 16, 2021, in Geneva, Switzerland. Russia’s present demands are based on Putin’s purported long sense of grievance and his rejection of Ukraine and Belarus as truly separate, sovereign countries but rather as part of a Russian linguistic and Orthodox motherland.

The crisis in Ukraine is hardly going away – a showdown of two world views that could upend Europe. It carries echoes of the Cold War and resurrects an idea left over from the 1945 Yalta Conference: that the West should respect a Russian sphere of influence in central and eastern Europe.

Since coming to power in 2000, Russian President Vladimir Putin has worked steadily and systematically to reverse what he views as the humiliating break-up of the Soviet Union 30 years ago.

While massing troops along Ukraine’s border and holding war games in Belarus, close to the borders of NATO members Poland and Lithuania, Putin is demanding that Ukraine be permanently barred from exercising its sovereign right to join the Western alliance, and that other NATO actions, such as stationing troops in former Soviet bloc countries, be curtailed.

NATO has said the demands are unacceptable and that joining the alliance is a right of any country and does not threaten Russia. Putin’s critics argue that what he really fears is not NATO, but the emergence of a democratic, prospering Ukraine that could offer an alternative to Putin’s increasingly autocratic rule, which Russians might find appealing.

Russia’s present demands are based on Putin’s long sense of grievance and his rejection of Ukraine and Belarus as truly separate, sovereign countries, but rather as part of a historic Russian linguistic and Orthodox motherland.

In a millennium-spanning treatise last summer, titled ‘The Historical Unity of Russians and Ukrainians’, Putin tipped his hand. He insisted that the separation of Russia, Ukraine and Belarus into separate states today is artificial, largely because of political mistakes during the Soviet period and, in the case of Ukraine, driven by a malevolent “anti-Russia project” supported by Washington since 2014.

His Russo-centric view of the region poses a crucial test for US President Joe Biden, who already is grappling with crises on multiple domestic fronts – the coronavirus pandemic, resurgence of inflation, a divided nation in which a large segment of the electorate refuses to acknowledge his presidency and a Congress that has blocked many of his social and climate goals.

Biden has ruled out military intervention to support Ukraine, and instead has employed intense diplomacy and rallied Western allies to support what he promises will be severe and painful sanctions against Russia, if it dares to invade Ukraine. But, depending on how the situation plays out, he has admitted he could have trouble keeping all the allies on board.

The Russian leader has already invaded Ukraine once, with little reaction. Russia took Crimea back from Ukraine in 2014 and has supported pro-Russian Ukrainian separatists fighting the Kyiv government in the Donbass region, a quiet war that has killed 14,000 people, more than 3,000 of them civilians.