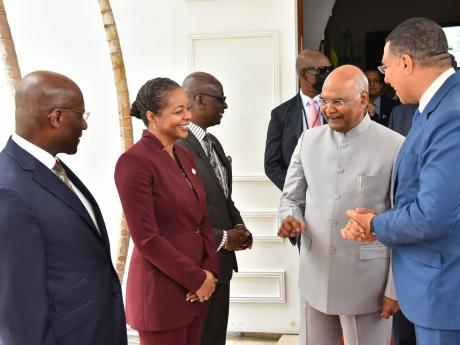 Prime Minister, Andrew Holness (right), introduces President of the Republic of India, Ram Nath Kovind (second right), to Cabinet Ministers during a courtesy call at the Office of the Prime Minister on Monday. From left are Minister of Industry, Investment and Commerce, Aubyn Hill; Minister of Legal and Constitutional Affairs, Marlene Malahoo Forte; and Minister of Local Government and Rural Development, Desmond McKenzie. -Contributed photo.

Minister of Industry, Investment and Commerce, Aubyn Hill, is inviting investments by Indian companies, particularly those involved in pharmaceuticals, in the Caymanas Special Economic Zone in St Catherine.

Speaking with JIS News, Hill said the approximately 1,000-acre campus, which will be developed under the Jamaica Special Economic Zone Authority (JSEZA) regime, is an opportunity to further strengthen the commercial collaboration between Jamaica and India.

“I am inviting Indian pharmaceutical companies [and] Indian investors to come to Jamaica and invest in our logistics centre at Caymanas and to make sure that collaboration between Jamaica and India will strengthen commercially,” he said.

He noted that due to the coronavirus (COVID-19) pandemic and the Russia-Ukraine war, “long supply chains from… Russia to Egypt are now problematic”.

He pointed out that “Jamaica is ideally situated next to the largest economy in the world (United States of America) and Canada is right there and then we have Latin America and the Caribbean”.

He noted that with the changing times, “we have to look for new trading partners”.

“India is an excellent [trading partner] with a legal system that we know and with a collaboration that we've had for a long time,” he added.

Hill was part of the Jamaican delegation at the Office of the Prime Minister for Monday's courtesy call on Prime Minister Andrew Holness by President of the Republic of India, Ram Nath Kovind.

The courtesy call formed part of a four-day State visit to the island by the Indian President that began on Sunday.

The meeting included the signing of a Memorandum of Understanding which will provide for training through Jamaica's Foreign Service Institute.

Kovind's visit to Jamaica is a first for an Indian President over the 60 years of relations between the two countries.

He is scheduled to depart the island on Wednesday.