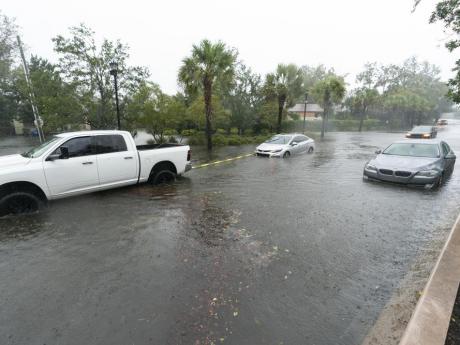 A good samaritan pulls a stuck motorist from the high water during the effects of Hurricane Ian, Friday, September 30, 2022, in Charleston, South Carolina. (AP Photo/Alex Brandon)

CHARLESTON, S.C. (AP) — A revived Hurricane Ian made landfall on coastal South Carolina on Friday, threatening the historic city of Charleston with severe flooding after the deadly storm caused catastrophic damage in Florida and trapped thousands in their homes.

Ian's centre came ashore near Georgetown with much weaker winds than when it crossed Florida's Gulf Coast on Wednesday as one of the strongest storms to ever hit the US, according to the National Hurricane Center.

Sheets of rain whipped trees and power lines and left many areas on Charleston's downtown peninsula under water. A popular pier in the beach community of Pawleys Island collapsed and floated away.

In Myrtle Beach, waves pushed against the boardwalk tourist area.

Ian left a broad swath of destruction in Florida, flooding areas on both of its coasts, tearing homes from their slabs, demolishing beachfront businesses and leaving more than two million people without power.

At least nine people were confirmed dead in the US — a number that was expected to increase as officials confirm more deaths and search for people.

Rescue crews piloted boats and waded through riverine streets Thursday to save thousands of people trapped amid flooded homes and shattered buildings .

Florida Governor Ron DeSantis said Friday that crews had gone door-to-door to over 3,000 homes in the hardest-hit areas.

“There's really been a Herculean effort,” he said during a news conference in Tallahassee.