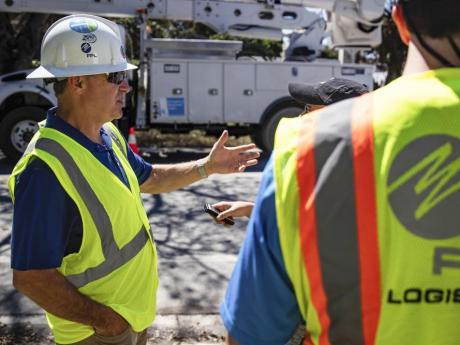 BONITA SPRINGS, Fla. (AP) — Nearly a week after Hurricane Ian smashed into Florida and carved a path of destruction into the Carolinas, hundreds of thousands of people faced another warm day without electricity Tuesday as rescuers pressed on with their search for anyone trapped inside flooded and damaged homes.

At least 78 people have been confirmed dead from the storm: 71 in Florida, four in North Carolina and three in Cuba since Ian made landfall on the Caribbean island on September 27, and in Florida a day later.

The number of storm-related deaths has risen in recent days amid the search and rescue efforts and it could increase further as authorities comb through some of the hardest-hit areas of Florida.

Officials said that as of Monday, more than 1,900 people had been rescued throughout the state.

For many Florida residents, power restoration has become job one.

In Naples, Kelly Sedgwick was just seeing news footage Monday of the devastation Ian had caused, thanks to power that was restored four days after the hurricane slammed into her Gulf Coast community of roughly 22,000 people.

A few miles north along the coast in Bonita Springs, Catalina Mejilla was still using a borrowed generator to try to keep her kids and their grandfather cool amid the warm temperatures as they waited for their power to be returned.

Ian knocked out power to 2.6 million customers across Florida after it roared ashore with 150 mph (241 kph) winds and a powerful storm surge.

Since then, crews have been feverishly working to restore electricity infrastructure. State officials said they expect power to be restored by Sunday to customers whose power lines and other electric infrastructure is still intact.

About 430,000 homes and businesses in Florida were still without power early Tuesday.