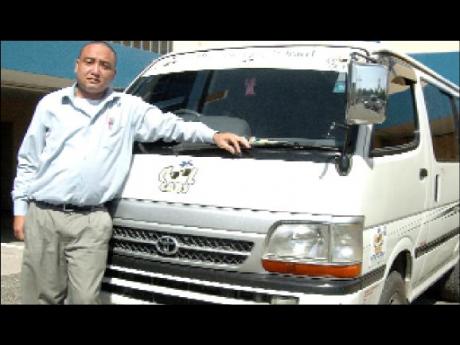 Paul Yapp, owner of Cool Cabs and operator of a network of 60 cabs. - Peta-Gaye Clachar/Freelance Photographer

A taxi service is a business with relatively small margins in profit and intense man-hour input, yet in July PaulYapp decided to give up his position as paid employee in a Kingston company to create his own - Cool Cabs.

Bringing together a group of just over 60 drivers since start-up, Yapp has been aggressively pursuing company contracts, which he says are the lifeblood of his operation.

The companies provide vouchers to drivers for the transportation of staff.

With these vouchers, cash is collected by Cool Cabs once or twice each month.

"We cannot allow our vouchers to pile up for one month. We run our service based off cash flow," Yapp explained.

Cool Cabs earns 15 per cent of voucher income and also charges its drivers what is said is the "competitive" price of $1,200 for weekly use of its radio service.

The weekly charge, according to Yapp, was used to woo drivers to the new service.

Drivers were also screened for licence infractions, police records, adequate insurance and were also asked to provide photographs and recommendations to the Cool Cabs' office. Each driver also needed an excellent knowledge of the streets of the Corporate Area.

And, now that they are on-board, they are discouraged, Yapp said, from the dangerous 'shotta' driving, although this, he said, is often requested by some passengers who want to beat traffic to reach work on time.

The drivers are also expected to dress well and keep their cars clean.

Now that the service is up and rolling, costs for Cool Cabs are said to be high and include the salaries of six dispatchers who work in the 24-hour service, plus high telephone bills, other utility charges and an $18,000 monthly fee for the Yellow Pages' advertisement.

Shortly after taking over the offices of the defunct Candy Cab at the foot of Beverly Hills on Mountain View Avenue in Kingston, Yapp decided to leave this location which cost $80,000 in rental monthly for more affordable premises in Rollington Town at $20,000.

The cost of electricity and water in Rollington Town is also cheaper than the other location uptown, he said.

With smaller earnings in a recession, there are a number of company-imposed restrictions. For example, drivers are no longer allowed to wash their cars at the base and air conditioning at the office is not used at nights.

Administrative staff have also been asked to conserve on the use of paper.

Recessionary challenges for the fledgling venture include keeping fares consistent and in line with those being charged by larger competing companies.

"The Government says that the cost of one stage is $250. It actually costs us more, but we keep it at that level," said Yapp.

He added that rates charged by the large companies are lower than those charged by sole operators who occupy various taxi stands around the city.

A sole-operator taxi travelling from downtown to Havendale, for example, will charge $700, he said, but Cool Cabs and its larger competitors keep the fare for the same journey at $500.

"Most of my clients are working-class people who do not have a lot of money. These are people we want to keep carrying every day. We keep fares low to keep them," Yapp explained.

Since the recession Yapp said, earnings have fallen from an easy $5,000 daily to $3,000 out of which fuel must be purchased.

Income for the cab drivers ranges between $10,000 to $15,000 weekly after paying for gas, meals and other maintenance charges.

But, out of this too, must be saved annual and quarterly expenses including insurance, which is often more than $100,000 annually for each vehicle which carries public passengers.

Other costs include annual government licence and fitness fees. The hackney carriage license fee is $12,000 while that for a contract carriage is $13,100.

According to Yapp, many drivers, including him, were forced this year to refinance their car loans with banks in order to stay afloat.

By going to the credit union mid-year for refinancing he was able to cut monthly payments for his 12-seater van from $36,000 previously paid to a commercial bank, to $28,700.

So, why did he decide to hang his shingle in such difficult times?

"I felt I needed a challenge and I also wanted to be my own boss," the 39-year-old said.

"I believe also that Cool Cabs is a good service with nice, clean cars, which represent value for money."

It's a very tight operation financially, he said, which means that being the boss, he barely rests.