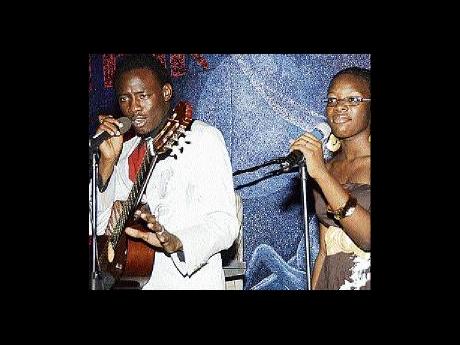 With Jamaica experiencing an economic downturn, the promotion of new celebratory parties to begin the New Year seemed understandably few in number. Fortunately for revellers, the more traditional New Year's Eve parties stood their ground. One of the traditional hosts was The Jamaica Pegasus hotel in New Kingston.

The Jamaica Pegasus New Year's Eve Party was a glamorous affair. Although there was a $500 reduction in ticket prices this year, the organisers held back no punches. The decor was well arranged and beautifully coordinated; creating the ideal atmosphere for comfortable revelry served with food and vintage music.

The spacious ballroom, large enough to hold 600, was fitted with tables and chairs for 500 guests - "for comfort, it is not a night for wanting to burst at the seams" explained Nancy Mclean, the hotel's manager. Each table boasted preset party favours which guests either adorned themselves with on their arrival or used later to welcome the new year. And, immediately in front of the average-height stage was the dancing area.

Entertainment for the evening was provided mainly by the Peter Phillips Disco, and the dancing area became the instrument of measurement that revealed what the revelers thought of the musical selections. But with several years of playing at the 'party' under their belts, there was no opportunity for complaints and the stage was constantly in use, except during dinner.

In fact, the disco's young operator was a gem. His timing and placement of music throughout the evening's proceedings was remarkable. To start the party, slow instrumental music ushered guests to their seats, and once most were seated, the gradual increase in tempo and genre (reggae, discotheque and calypso) lured them to the dance floor.

Later, after a hearty meal, and before midnight drew nigh, patrons were once again enticed onto to the dance floor to show What One Dance Can Do (Beres Hammond) and also got to do the same with Rocking Robin, as well a chance to [Lets] Do the Twist. Soon, it was time for the customary countdown and before the balloons fell, MC Norma Brown-Bell, the band Ozune and the group vocalists, To-Isis worked the audience into New Year fever. And at the stroke of midnight, there were much singing, kissing and the new custom of flashing lights from digital cameras.

Ozune, in their first performance at this New Year's Eve Party, was on hand to give musical support to the vocalists. Along with their "friends" Oneil Peart, Mary Isaacs and Ashley Martin, they entertained the fair-size turnout with 'music for the occasion'. To-Isis gave the audience a taste of songs such as Strength of a Woman, and a medley of old hits.

As the curtains came down on another Jamaica Pegasus New Year's Eve Party, the patrons gave the organisers and the event the thumbs up. For fourth-time repeater, fashion model Nadine Willis, her reason for repeatedly attending the event is "great music and food, romantic atmosphere and a well-organised event".

Similar sentiments were shared by sixth-time repeater Easton Gordon and first-time attendee George Desmond. Both men's shirts showed signs of spending quality time on the dance floor. Bahamas-born Desmond, who is spending his first New Year in Jamaica, found the atmosphere friendly. And both he and Gordon cited the service of the staff as another plus.

But to achieve such faithful patrons and complimentary remarks require a strategy. Nancy McLean explains "Once there is a formula you stick to it. Plan early; by August we organised the party fee. We were able to keep the cost down by putting a package together. The rolling back of the ticket cost is our gift to the people.

"It is their time to enjoy themselves" the smiling manger concluded.