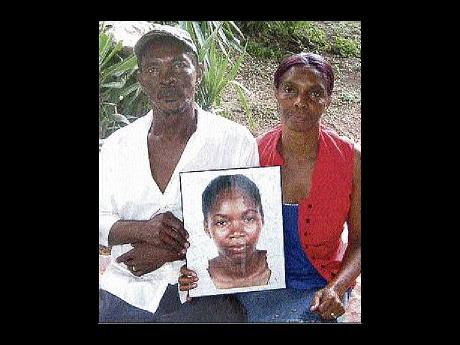 Norman and Gloria Scott holding a photo of their 15-year-old daughter Donna-Lee, who has been missing since 2007.The couple are adamant that a body found in the district three weeks after her disappearance is that of their missing teenage daughter. The corpse has been lying in a public morgue since 2007. - photo by Nedburn Thaffe

ALREADY SADDLED with the burden of losing their daughter nearly three years ago, a St Mary family is begging for the opportunity to give her a peaceful burial.

Fifteen-year-old Donna-Lee Scott disappeared in 2007 and has been presumed dead since.

A body believed to be Donna-Lee's was found in the parish but, much to the dismay of her parents, they say government pathologists have not been able to conclude whether it is that of the missing girl.

"We are grieving. For the past two years, I have been hearing that the sample they have is inconclusive and until now that is what I have been getting," Donna-Lee's mother, Gloria Scott, told The Gleaner.

The body, which family members say matches the description of Donna-Lee, was found in the Eden Park community, about a mile from where she was living. It was found three weeks after her disappearance on January 25, 2007.

According to police, the body, which was found in an abandoned water tank with a bullet wound to the head, was in an advanced stage of decomposition, making it impossible to determine the identity without forensic assistance.

In the meantime, Gloria and her husband, Norman Scott, have been left only to hope that one day they can lay their daughter to rest.

Gloria said there is no doubt the body that has been lying in the public morgue for almost three years is that of her daughter.

She told The Gleaner that she was able to identify the body by the pieces of clothing that were found near it.

"The white school blouse that she was wearing and her underwear were still there. She had on a jeans skirt underneath her clothes and that's how I know it's her," the mother said firmly.

She added that, since the discovery of the corpse in 2007, she had even made funeral arrangements, believing that she would have received word already that the body was that of Donna-Lee.

"We made funeral arrangements from 2007. We even make a vault put dung fi bury her and mi affi use that same vault bury mi father in," Gloria stated as she fought back tears.

"We need to know if we going to get back the result or if we should go and tek the body from the funeral home," she further lamented.

Up to press time yesterday, The Gleaner was unsuccessful in efforts to get a comment from the investigating officer and the crime chief for the parish.