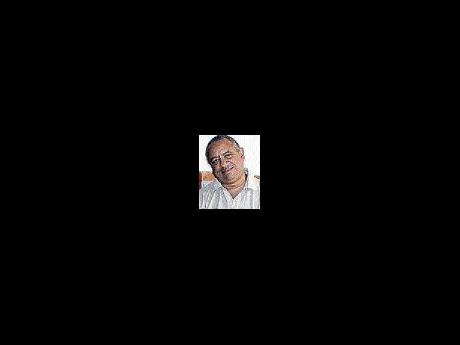 I ACQUIRED every technical require-ment qualifying me as Bank of Jamaica (BOJ) governor one Friday night around a domino table.

It was five-all in the last six. A win meant untold wealth (J$60). All my dominoes could be played. Everybody else held one. I loved the simplicity of this domino situation. It requires one to pause, review the game carefully, assign each player a domino based on a Sherlock Holmesian process of eliminating the impossible, thus revealing the obvious answer. What 'passed' him? Why did he abandon his 'hard-end'? Did he 'read'?

Then there's 'check-back': does your assignments mean that the partnership can't win? If so, then you must readjust assignments within the context of reality but to make winning possible. I meticulously applied the Holmesian process despite the cacophony of obligatory sledging: "Wha'ppen, Bishop, you fall asleep?" "My play?" or, my personal favourite (sung), "And, now, the end is near ..." Finally, I made the right choice and Autry exposed his winning domino.

The Beast paid Autry the tariff immediately but I noticed Dessie was reluctant. Eventually, he voluntarily removed his gold friendship ring and presented it to me "Hold dis. You sure to get pay tomorrow." Well, I wore the ring for three years until it cracked on my finger and was discarded. Consequently, I learned never to permit debtors to dictate the payment terms of their debts.

Some months ago (in In Focus), I postulated that it's lunacy to run a fiscal deficit and suicide to run one of more than five per cent. I blamed our desperate need for the International Monetary Fund (IMF) on our 20-year romance with deficit financing. I was roundly abused and labelled a simpleton by 'expert' economists who superciliously informed me:

- A historical regurgitation of numbers was irrelevant to 'Jamaican reality';

- IMF agreements were for foreign-exchange support, not to fund budgets.

First, guilty as charged. I'm a simpleton. Simplicity is my philosophy. I find complexity unnecessary and confusing. 'Experts', however, use comple-xity like magicians' misdirection to lure simpletons into a need for experts. The simple facts are:

- The genesis of all our economic problems can be traced to the embrace of deficit financing;

- Deficits cannot be reduced/erased by edicts to reduce interest rates.

On December 17, while speaking on the new IMF-imposed tax package as Representative of "The Mother of All Garrisons" (cabinet members don't sit in a House of representatives as ministers), 'Driva' seemed to show, for the first time, some intellectual appreciation for these fundamentals. Previously, his public pronouncements on the topic were to the contrary, but why would we be surprised if he's an expert with oral Spanish machetes?

Let's keep it simple. Everybody knows that debt servicing approaches 60 per cent of our annual budget. Debt to gross domestic product consistently exceeds 100 per cent and our total debt stock quadruples annual revenues!! But, did you know that the majority of our debt stock is local debt?

'Local debt' includes the money you put 'on deposit' in Government bonds through your friendly neighbourhood margin-gatherer (oops, sorry, 'bank') at exorbitant interest rates that exclude productive investment from competing for your capital. This happens because revenue inflows can't meet recurrent commitments, so Government must creatively raise more by borrowing from taxpayers. These borrowings aren't for developmental use but flushed down the recurrent expenditure loo. So, despite being already overtaxed, we close the tax-and-spend 'gap' with our 'investments', which Government borrows, not to reinvest, but for everyday expenses. This I call 'dancehall economics'.

Then, every month-end, despite dancehall economics' gymnastics, salaries still can't be paid so the financial secretary calls around begging further facilities from Jamaican banks. In return, will BOJ be able to give your margin-gatherer a gold ring to hold or insist on a reduction in interest rates?

Read my lips: any attempt to reduce interest rates by edict amounts to Jamaica defaulting on its debt, regardless of how it's dressed up for public consumption. What's 'debt restructuring' to Moody's is 'default on debt' to Standard and Poor's.

This high interest rate 'regime' is an illusion. There's no 'regime', only a natural consequence of Government's fiscal irresponsibility. And, after 2009's first two pathetic attempts to postpone the inevitable with more dancehall economics presented as increased taxes, it's proven that Jamaica's taxable limit is passed. So, what's the Holmesian solution? Elementary, my dear Watson. If we eliminate more borrowing, higher taxes and fiscal deficits, what's left? Government must spend less. All else follows naturally. Simple advice from a simpleton: No edict required.

Gordon Robinson is an attorney at law. Feedback may be sent to columns @gleanerjm.com.